A History of Science, Volume 5 Aspects Of Recent Science 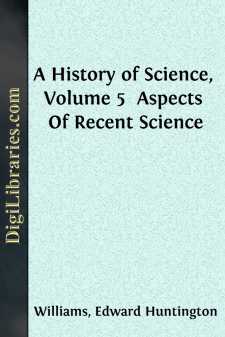 STUDENTS of the classics will recall that the old Roman historians were accustomed to detail the events of the remote past in what they were pleased to call annals, and to elaborate contemporary events into so-called histories. Actuated perhaps by the same motives, though with no conscious thought of imitation, I have been led to conclude this history of the development of natural science with a few chapters somewhat different in scope and in manner from the ones that have gone before.

These chapters have to do largely with recent conditions. Now and again, to be sure, they hark back into the past, as when they tell of the origin of such institutions as the British Museum, the Royal Society, and the Royal Institution; or when the visitor in modern Jena imagines himself transplanted into the Jena of the sixteenth century. But these reminiscent moods are exceptional. Our chief concern is with strictly contemporary events—with the deeds and personalities of scientific investigators who are still in the full exercise of their varied powers. I had thought that such outlines of the methods of contemporary workers, such glimpses of the personalities of living celebrities, might form a fitting conclusion to this record of progress. There is a stimulus in contact with great men at first hand that is scarcely to be gained in like degree in any other way. So I have thought that those who have not been privileged to visit the great teachers in person might like to meet some of them at second hand. I can only hope that something of the enthusiasm which I have gained from contact with these men may make itself felt in the succeeding pages.

It will be observed that these studies of contemporary workers are supplemented with a chapter in which a hurried review is taken of the field of cosmical, of physical, and of biological science, with reference to a few of the problems that are still unsolved. As we have noted the clearing up of mystery after mystery in the past, it may be worth our while in conclusion thus to consider the hordes of mysteries which the investigators of our own age are passing on to their successors. For the unsolved problems of to-day beckon to the alluring fields of to-morrow.

I. THE BRITISH MUSEUM

IN the year 1753 a remarkable lottery drawing took place in London. It was authorized, through Parliament, by "his gracious Majesty" King George the Second. Such notables as the archbishop of Canterbury and the lord chancellor of the realm took official interest in its success. It was advertised far and wide—as advertising went in those days—in the Gazette, and it found a host of subscribers. Of the fifty thousand tickets—each costing three pounds—more than four thousand were to be of the class which the act of Parliament naively describes as "fortunate tickets." The prizes aggregated a hundred thousand pounds.

To be sure, state lotteries were no unique feature in the England of that day. They formed as common a method of raising revenue in the island realm of King George II....