A History of Science - Volume 1 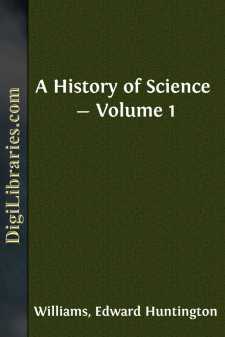 To speak of a prehistoric science may seem like a contradiction of terms. The word prehistoric seems to imply barbarism, while science, clearly enough, seems the outgrowth of civilization; but rightly considered, there is no contradiction. For, on the one hand, man had ceased to be a barbarian long before the beginning of what we call the historical period; and, on the other hand, science, of a kind, is no less a precursor and a cause of civilization than it is a consequent. To get this clearly in mind, we must ask ourselves: What, then, is science? The word runs glibly enough upon the tongue of our every-day speech, but it is not often, perhaps, that they who use it habitually ask themselves just what it means. Yet the answer is not difficult. A little attention will show that science, as the word is commonly used, implies these things: first, the gathering of knowledge through observation; second, the classification of such knowledge, and through this classification, the elaboration of general ideas or principles. In the familiar definition of Herbert Spencer, science is organized knowledge.

Now it is patent enough, at first glance, that the veriest savage must have been an observer of the phenomena of nature. But it may not be so obvious that he must also have been a classifier of his observations—an organizer of knowledge. Yet the more we consider the case, the more clear it will become that the two methods are too closely linked together to be dissevered. To observe outside phenomena is not more inherent in the nature of the mind than to draw inferences from these phenomena. A deer passing through the forest scents the ground and detects a certain odor. A sequence of ideas is generated in the mind of the deer. Nothing in the deer's experience can produce that odor but a wolf; therefore the scientific inference is drawn that wolves have passed that way. But it is a part of the deer's scientific knowledge, based on previous experience, individual and racial; that wolves are dangerous beasts, and so, combining direct observation in the present with the application of a general principle based on past experience, the deer reaches the very logical conclusion that it may wisely turn about and run in another direction. All this implies, essentially, a comprehension and use of scientific principles; and, strange as it seems to speak of a deer as possessing scientific knowledge, yet there is really no absurdity in the statement. The deer does possess scientific knowledge; knowledge differing in degree only, not in kind, from the knowledge of a Newton. Nor is the animal, within the range of its intelligence, less logical, less scientific in the application of that knowledge, than is the man. The animal that could not make accurate scientific observations of its surroundings, and deduce accurate scientific conclusions from them, would soon pay the penalty of its lack of logic.

What is true of man's precursors in the animal scale is, of course, true in a wider and fuller sense of man himself at the very lowest stage of his development....