A History of Pantomime 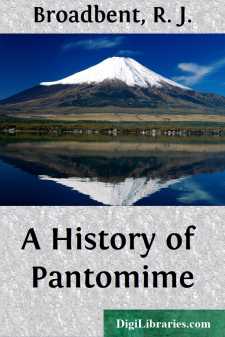 CHAPTER I. Origin of Pantomime.

From the beginning of all time there has been implanted in the human breast the Dramatic instinct full of life and of vigour, and finding undoubtedly its outlet, in the early days of civilization, if not in the Dramatic Art then in the poetry of motion with that necessary and always essential concomitant of both—Pantomime. Indeed, of the Terpsichorean Art, it has been truly observed "That deprived of the imitative principle (i.e., Pantomime), the strength, the mute expression, it becomes nothing but a series of cadenced steps, interesting merely as a graceful exercise." Equally so in every way does it apply to the Dramatic Art, which minus its acting, its gestures—in a word, its Pantomime—we have nothing but, to quote Hamlet, "Words, words, words."

In observing "That all the world's a stage, and the men and women merely players," Shakespeare doubtless included in the generic term "players," Pantomimists as well: Inasmuch as this, that when, and wherever a character is portrayed, or represented, be it in real life or on the stage—"Nature's looking-glass," and the world in miniature—the words that the individual or the character speaks, are accompanied with gesture and motion, or, in other words, Pantomime, when "The action is suited to the word, the word to the action."

To trace the original origin of Pantomime, or Mimicry, we must go to Nature herself where we can find this practised by her from the beginning of all time as freely, and as fully, as ever it was, or ever will be, upon the stages of our theatres. What better evidence, or instances, of this can we have than in those studies of her handiwork? as the larger species of caterpillars, when, by stretching themselves out in imitation of, and to make their foes think that they are snakes; tigers and lions choosing a background in keeping with, and in imitation of, the colours of their bodies, in order to seize their unwary prey; and for the same purpose crocodiles imitating a rotting log; the green tint of the lizard's skin for the sake of concealment; the playful imitativeness of the mocking bird; the hysterical laugh of the hyaena; the gaudy colours of tropical snakes imitated by others, besides many other examples of Mimicry, in such as butterflies of the species Danaidae and Acraediae, the Heliconidiae of tropical America; and hornets, wasps, ants, and bees. All this, it may be urged, is only instinct. True; but is it not also Mimicry—the Pantomime of Nature, and, though, of course, of a different kind, and for very different objects, is, nevertheless, of a kind of instinctive Pantomime or Mimicry which each and every one of us possesses in greater or lesser degrees, and as much as we do the Dramatic instinct.

The very name Pantomime itself signifies Nature as Pan was amongst the Ancients, the allegorical god of Nature, the shepherd of Arcadia, and with Mimos, meaning an imitator, we have, in the combination of these two words, "an imitator of Nature," and from whence we derive the origin of our word Pantomime....