A History of Mediaeval Jewish Philosophy 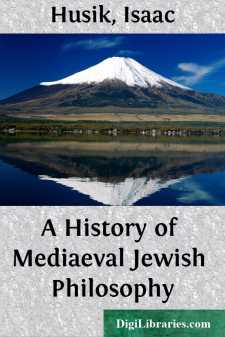 No excuse is needed for presenting to the English reader a History of Mediæval Jewish Philosophy. The English language, poor enough in books on Jewish history and literature, can boast of scarcely anything at all in the domain of Jewish Philosophy. The Jewish Encyclopedia has no article on Jewish Philosophy, and neither has the eleventh edition of the Encyclopedia Britannica. Hastings' Encyclopedia of Religion and Ethics will have a brief article on the subject from the conscientious and able pen of Dr. Henry Malter, but of books there is none. But while this is due to several causes, chief among them perhaps being that English speaking people in general and Americans in particular are more interested in positive facts than in tentative speculations, in concrete researches than in abstract theorizing—there are ample signs that here too a change is coming, and in many spheres we are called upon to examine our foundations with a view to making our superstructure deep and secure as well as broad and comprehensive. And this is nothing else than philosophy. Philosophical studies are happily on the increase in this country and more than one branch of literary endeavor is beginning to feel its influence. And with the increase of books and researches in the history of the Jews is coming an awakening to the fact that the philosophical and rationalistic movement among the Jews in the middle ages is well worth study, influential as it was in forming Judaism as a religion and as a theological and ethical system.

But it is not merely the English language that is still wanting in a general history of Mediæval Jewish Philosophy, the German, French and Italian languages are no better off in this regard. For while it is true that outside of the Hebrew and Arabic sources, German books and monographs are the sine qua non of the student who wishes to investigate the philosophical movement in mediæval Jewry, and the present writer owes very much to the researches of such men as Joel, Guttmann, Kaufmann and others, it nevertheless remains true that there is as yet no complete history of the subject for the student or the general reader. The German writers have done thorough and distinguished work in expounding individual thinkers and problems, they have gathered a complete and detailed bibliography of Jewish philosophical writings in print and in manuscript, they have edited and translated and annotated the most important philosophical texts. France has also had an important share in these fundamental undertakings, but for some reason neither the one nor the other has so far undertaken to present to the general student and non-technical reader the results of their researches.

What was omitted by the German, French and English speaking writers was accomplished by a scholar who wrote in Hebrew. Dr. S. Bernfeld has written in Hebrew under the title "Daat Elohim" (The Knowledge of God) a readable sketch of Jewish Religious philosophy from Biblical times down to "Ahad Haam." A German scholar (now in America), Dr. David Neumark of Cincinnati, has undertaken on a very large scale a History of Jewish Philosophy in the Middle Ages, of which only a beginning has been made in the two volumes so far issued....