A History of Lumsden's Battery, C.S.A. 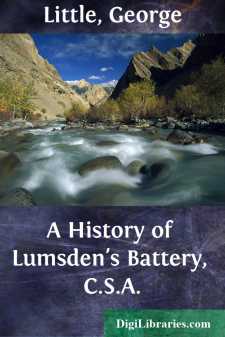 At the close of the spring term of the Circuit Court of Tuscaloosa County, Alabama, in May, 1861, Judge Wm. S. Mudd announced from the bench that Mr. Harvey H. Cribbs would resign the office of Sheriff of the County for the purpose of volunteering into the Army of the Confederate States and would place on the desk of the Clerk of the Court an agreement so to volunteer signed by himself, and invited all who wished to volunteer to come forward and sign the same agreement. Many of Tuscaloosa's young men signed the same day.

By the end of the week following the list had grown to about 200 men. Capt. Charles L. Lumsden, a graduate of the Virginia Military Institute was commandant of Cadets at the University of Alabama and had been contemplating the getting up of a company for service in Light or Field Artillery and had been corresponding with the War Department and Army officers already in service concerning the matter.

These volunteers, on learning this fact, at once offered themselves to Capt. Lumsden as a company of such artillery.

Dr. George W. Vaughn, son of Edward Bressie Vaughn (who afterwards gave two other younger sons to the cause) and Mr. Ebenezer H. Hargrove, also of Tuscaloosa County, had married two Mississippi girls, sisters, the Misses Sykes of Columbus, Mississippi, and were engaged in planting in Lowndes County, Miss. Hearing of this Artillery Co. they sent their names to be added to the list. Dr. George Little, Professor of Chemistry in Oakland College, Mississippi, and his younger brother, John Little, Principal of the Preparatory Department, resigned their places and returned to Tuscaloosa to join this Company. Edward Tarrant, Superintendent of Education for Tuscaloosa County, had a flourishing educational institute called the Columbian Institute at Taylorville four and a half miles south of Tuscaloosa. He gave up his school and joined the Company, where two of his sons, Ed William and John F., afterwards followed him.

Joseph Porter Sykes, a nephew of the Sykes sisters, had been appointed by Pres. Davis a Cadet in the regular C. S. Army and at his request was assigned to this Company. Dr. Nicholas Perkins Marlowe and Drs. Caleb and Wm. Toxey served as surgeons at different times and Dr. Jarretts and McMichael and Dr. Hill also later. We mention these doctors who entered the ranks as privates as emphasizing the spirit that was moving the young men of the time in every trade and profession. But their country had too crying a need of medical men, in a few weeks, to permit them to continue to serve with arms in their hands, and all of them were soon promoted to the service for which their education fitted them, serving as Regimental and Brigade surgeons and high in their profession after the close of the war. In May the election of officers was held and resulted in election of Charles Lumsden, Captain; George W. Vaughn, Sr., First Lieutenant; Henry H. Cribbs, Jr., First Lieutenant; Ebenezer H. Hargrove, Sr., Second Lieutenant; Edward Tarrant, Jr., Second Lieutenant; Joseph Porter Sykes, Cadet.

The following were appointed non-commissioned Officers: