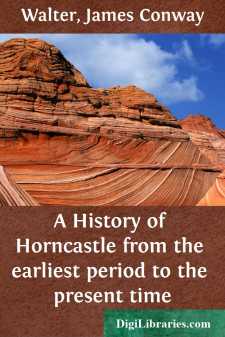 The following pages may truthfully be said to be the result of labours, extending over many years, and of researches in directions too many to tell.

Born within almost a mile of Horncastle, and only by a few months escaping being born in it, since his father, on first coming to the neighbourhood, resided for a time in Horncastle, the author, from his earliest years (except for periodical absences) has been connected with the life, social or civil, of the place, probably more closely and more continuously, than any other person living, in like circumstances.

The notes on which this compilation is based were begun more than 30 years ago.  While writing a volume of Records of more than 30 Parishes around Horncastle, published in 1904; and, before that, while describing about as many more, in a volume, Woodhall Spa and Neighbourhood, published in 1899, he had constantly in view the crowning of the series, by the history of the old town, round which these sixty, or more, parishes cluster; the haunt, if not quite the home, of his boyhood, and familiarized to him by a life-long connection.

For this purpose sources of information have been tapped in every possible direction; of public institutions, the official records, and title deeds, where available, have been carefully consulted; especially should be here mentioned various deeds and charters, which are quoted in Chapter II, from the archives of Carlisle Cathedral, which have not hitherto been brought before the public, but of which the author has been allowed free use, through the courtesy of the librarian.  These are of special value, from the long connection of the Manor of Horncastle with the See of Carlisle.

In other cases the author has been allowed the privilege of more private testimony; for instance, his old friend, the late Mr. John Overton (of a highly respectable family, for generations connected with the town and county), has most kindly given him the use of various family MS. notes, bearing on parish and other matters.  Mr. Henry Sharp has freely assisted him with most varied information, derived from long years of connection with the town, in public or private capacity.  The late Mr. Henry Boulton, ancestrally connected with various parts of the county, was remarkable for a mind stored with memories of persons and things, in town and neighbourhood, which he freely communicated to the author, who saw much of him in his later years.  While, last but not least, the late Mr. William Pacey, whether in his “Reminisences of Horncastle,” which he contributed to the public newspapers, or in his personal conversations, which the present writer enjoyed for many years, yielded up to him treasure, collected by an indefatigable student of local lore, who entered into such work con amore.

To all these the author would now fully, and gratefully, acknowledge his indebtedness; but for them this work could not have been produced in anything like its present fulness.  In some of the matters dealt with, as for instance in the accounts of the Grammar School, as well as in other portions, he may fairly say, in the language of “the pious Æneas” (slightly modified), “quorum pars (ipse) fui,” (Æneid ii, 6); and in these he has drawn not a few of the details from his own recollections.

In stringing these records together, of such varied character, and on subjects so numerous, he cannot but be conscious that, in the endeavour to give all possible information, and to omit nothing of real interest, he may, on the other hand, have laid himself open to the charge of being too diffuse, or even needlessly prolix.  Others not sharing his own interest in the subjects treated of, may think that he has occasionally “ridden his hobby too hard.”  If this should be the judgment of any of his readers, he would crave their indulgence out of consideration for the motive....