A History of Giggleswick School From its Foundation, 1499 to 1912 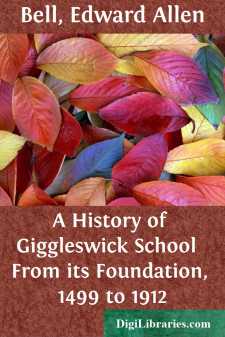 The history of Giggleswick School has just two difficulties about it which need to be unravelled. The date of the foundation of the School or of the Chantry of the Rood and the origin of the Seal alone are of interest to the antiquary and I have failed to discover either. The remainder is the story of a school, which has always had a reputation in the educational world and at the same time has left only the most meagre records of itself. The gentry of the neighbourhood were its scholars, but few have made their fame in the world without. Headmasters and Ushers have passed their lives here, but few were ambitious. Giggleswick was their haven of old age. Customs grew up, the same customs died and only seldom is it possible to conjecture their character.

A nation without a history is considered to have had the most blessed existence and the same is true of a school. Giggleswick has but once been the prey of the brigand and then it was fortunate enough to have a friend at court. It lost its original endowment and its private character. It gained a larger revenue and a Royal Charter. The placidity of its life was undisturbed by financial deficits. Its income expanded steadily. The close corporation of Governors were never ambitious to display their wealth, they never excited the greed of the statesman; even Cromwell's army passed through the district unmentioned by the Minute-Book.

It did not grow, it made no history, but continued on the even tenour of its path. Some years it was effective as a school of instruction, some years it was not, but never did it meet with the inquisitorial landlord, never but once did it suffer from the Crown. With the nineteenth century came its first crisis for three hundred years and it passed through unhurt. A new school with the old endowments, a better education with a wider horizon, a new power with which to meet the coming needs were all engrafted on the old foundation. If romance involves moments of startling excitement, Giggleswick has no romance. But if romance lies in an unrecorded, unenvied continuity, in the affection of pupils that age after age causes men to send their sons and their sons' sons to the same school, then the history of Giggleswick is shot through with romance. No school can continue for more than a generation, if this supreme test of its hold upon the hearts of men should fail. The school that nurtured the father must do its duty by the son and the golden link of affection is forged afresh.

It would have been impossible to complete the task of writing the history of the School, if I had not received invaluable help from many sources. Two men in particular must accept my deepest gratitude—Mr. A. F. Leach and Mr. Thomas Brayshaw. Mr. Leach is the foremost authority in England on English Grammar Schools and he has never stinted his help. Mr. Brayshaw probably knows more than any other man of the history of the School during the last eighty years and he has supplied me generously with pamphlets and information....