A Historical Survey of the Customs, Habits, & Present State of the Gypsies 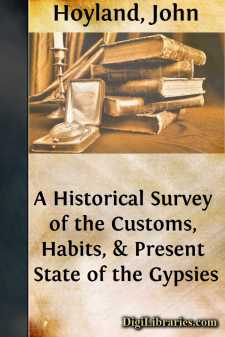 The author of the following Survey, has frequently had opportunity of observing the very destitute and abject condition of the Gypsey race, in the counties of Northampton, Bedford, and Herts.  The impressions received from viewing a state so derogatory to human nature, induced him to make numerous inquiries, in order to ascertain if necessity compelled their continuance, under circumstances so deplorable as their condition exhibited.

Not meeting with satisfactory intelligence on application to various individuals, to whose observation Gypsies are frequently presented, the author was excited to an examination of history, for the developement of a case involved in so much obscurity; and aggravated by circumstances so repugnant to the mild and genial influences of the Christian Religion.

He must not however omit to state, that in Northamptonshire, William Allen, who is in the profession of the law, at Higham Ferrers, and Steward to Earl Fitzwilliam, very warmly interested himself on the subject.  He said it afforded him much pleasure to find, that some attention was excited to the condition of the Gypsies, and that he should be glad to co-operate, as far as was in his power, in any measures likely to conduce to the reformation of this greatly neglected class of British subjects.

He volunteered his services to find out the nearest Gypsey rendezvous, and soon procured information of an encampment which the writer visited.  An account of the visit will appear in the following sheets.  The first assurance that the Gypsies really had a language peculiar to themselves, which the author received, was from this intelligent and obliging professor of the law, who had heard children, as well as adults among them, speak it with great fluency.

He also observed, that the situation of this people daily became increasingly deplorable, in consequence of the establishment of associations for the prosecution of felons; and that the fear of apprehension as vagrants, and the progressive inclosures near towns and villages, had a tendency to drive them to a greater distance from the habitations of man.  And he was fully of opinion, as these houseless wanderers were expelled from Township after Township, without any provision being made for their refuge, that it was high time their case should obtain the consideration of the public.

Of the historic authorities whence the author has derived information and interesting observation, he has to place in the foremost rank, the Dissertation of the learned H. M. G. Grellmann, translated a few years since, by the late M. Raper, Esq.  F.R.S. & A.S.  He has, however, to acknowledge himself indebted to various other intelligent authors, whose writings will be noticed in the course of the work.

Another source of information, and which relates especially to the present state of the Gypsies in Great Britain, has been opened through inquiries instituted in most parts of the nation, by the author, aided by several obliging and able coadjutors.  The results of these inquiries, it scarcely need be added, will be presented to the reader in their proper places.

The author has much regretted, that scarcely any of the splendid histories of Counties in England, and even those in which the Gypsies abound, have in the least noticed that part of the population which so strongly claims our attention.  By bringing their situation into view, the historian might not merely have served the cause of humanity; he would have advanced the interest of the state, by promoting an object of so much public utility, as the improvement of the whole Gypsey race cannot fail to prove.

A comparative view of their customs and habits, and how far they appear coincident in different countries, may afford a criterion by which to judge if they have all had one origin.  By thus tracing them to that source, we may possibly discover the occasion of their peculiarities; and if the means hitherto employed to counteract them, have proved unsuccessful, we may be prepared to consider of others, better adapted to correct the errors of their education....