A Heroine of France 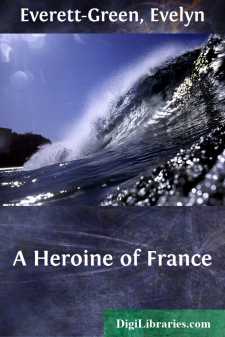 CHAPTER I. HOW I FIRST HEARD OF THE MAID.

"The age of Chivalry--alas!--is dead. The days of miracles are past and gone! What future is there for hapless France? She lies in the dust. How can she hope to rise?"

Sir Guy de Laval looked full in our faces as he spoke these words, and what could one reply? Ah me!--those were sad and sorrowful days for France--and for those who thought upon the bygone glories of the past, when she was mistress of herself, held high her head, and was a power with hostile nations. What would the great Charlemagne say, could he see us now? What would even St. Louis of blessed memory feel, could he witness the changes wrought by only a century and a half? Surely it were enough to cause them to turn in their graves! The north lying supine at the feet of the English conqueror; licking his hand, as a dog licks that of his master, lost to all sense of shame that an English infant in his cradle (so to speak) should rule through a regent the fair realm of France, whilst its own lawful King, banished from his capital and from half his kingdom, should keep his Court at Bourges or Chinon, passing his days in idle revelry, heedless of the eclipse of former greatness, careless of the further aggressions threatened by the ever-encroaching foe.

Was Orleans to fall next into the greedy maw of the English adventurers? Was it not already threatened? And how could it be saved if nothing could rouse the King from his slothful indifference? O for the days of Chivalry!--the days so long gone by!

Whilst I, Jean de Novelpont, was musing thus, a curious look overshadowed the face of Bertrand de Poulengy, our comrade and friend, with whom, when we had said adieu to Sir Guy a few miles farther on, I was to return to Vaucouleurs, to pay a long-promised visit there. I had been journeying awhile with Sir Guy in Germany, and he was on his way to the Court at Chinon; for we were all of the Armagnac party, loyal to our rightful monarch, whether King or only Dauphin still, since he had not been crowned, and had adopted no truly regal state or authority; and we were earnestly desirous of seeing him awaken from his lethargy and put himself at the head of an army, resolved to drive out the invaders from the land, and be King of France in truth as well as in name. But so far it seemed as though nothing short of a miracle would effect this, and the days of miracles, as Sir Guy had said, were now past and gone.

Then came the voice of Bertrand, speaking in low tones, as a man speaks who communes with himself; but we heard him, for we were riding over the thick moss of the forest glade, and the horses' feet sank deep and noiseless in the sod, and our fellows had fallen far behind, so that their laughter and talk no longer broke upon our ears. The dreamy stillness of the autumn woodlands was about us, when the songs of the birds are hushed, and the light falls golden through the yellowing leaves, and a glory more solemn than that of springtide lies upon the land.

Methinks there is something in the gradual death of the year which attunes our hearts to a certain gentle melancholy; and perchance this was why Sir Guy's words had lacked the ring of hopeful bravery that was natural to one of his temperament, and why Bertrand's eyes were so grave and dreamy, and his voice seemed to come from far away....