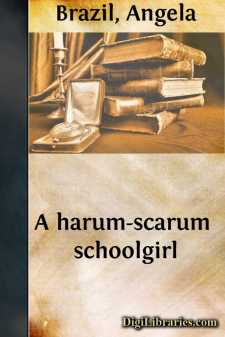 CHAPTER I A Pixie Girl

"If I'd known!" groaned Winifred Cranston, otherwise Wendy, with a note of utter tragedy in her usually cheerful voice. "If I'd only known! D'you think I'd have come trotting back here with my baggage? Not a bit of it! Nothing in this wide world should have dragged me. I'd have turned up my hair—yes, it's quite long enough to turn up, Jess Paget, so you needn't look at it so scornfully; it's as nice as yours, and nicer! Well, I tell you I'd have turned up my hair, and run away and joined the 'Waacs' or the 'Wrens', or have driven a motor wagon or conducted a tramcar, or scrubbed floors at a hospital, or done anything—anything, I say!—rather than stay at the Abbey without Mrs. Gifford."

"It's pretty stiff, certainly, for the Head to go whisking away like this," agreed Magsie Wingfield, sitting on the other shaft of the wheelbarrow. "And without any notice either! It leaves one gasping!"

"Stiff? It's the limit! Why didn't she give us decent warning, instead of springing it on to us in this sudden fashion? I feel weak!"

"There wasn't time," explained Sadie Sanderson, who, with Violet Gorton and Tattie Clegg, occupied, in a tight fit, the interior of the wheelbarrow. "It was all done at a day's notice. Geraldine's been telling me the whole history."

"Mr. Gifford got suddenly exempted, and was made Governor of some outlandish place with an unpronounceable name in Burma. He telegraphed to Mrs. Gifford to join him at Marseilles, and go out with him. So she went—that's the long and the short of it!"

"Went and left her school behind her," echoed Vi.

"I call it simply running away," commented Wendy. "Why couldn't she have stopped to arrange things—say till Christmas—and then followed him?"

"It's some tiresome red-tape business at the War Office. They'd give her a passport to travel out with him, but not to join him afterwards, so she thought she'd better take the opportunity and go out with him while she could. It must have been a terrific scramble for her to get off. I believe she just bundled her things together and bolted, and left the school to Miss Todd."

"Will she ever come back?"

"I shouldn't think it's likely now."

"Then we're left for evermore to the tender mercies of Toddlekins?"

"That's just about the size of it. Toddlekins has taken the whole thing over."

"She's been longing and yearning to seize the reins and drive the coach ever since she came," commented Tattie.

"And she'll use it, too! You bet there'll be changes!"

"Changes! There are changes already, although Mrs. Gifford can hardly have reached Marseilles yet."

"It's going to be a queer term," grunted Wendy.

The five girls were sitting in a retired corner of the garden at Pendlemere Abbey. On one side, above the tops of the rhododendron bushes, they could see the tall, twisted chimneys and flagged stone roof of the old house; on the other side, below the lawn and across the paddock, gleamed the silver waters of the lake, with its banks of rushes and alders, and beyond lay a range of grey hills that seemed to melt away into more distant peaks that merged into the mists on the horizon. It was a beautiful view, and on this hazy September afternoon, with the hidden sun sending long shafts of light from behind radiant masses of cloud, it formed a prospect that should have afforded keen æsthetic satisfaction to anybody who cared to look at it. Usually the girls appreciated its changeful glories, but to-day—this first day of a new term—they were too much taken up with their own grievances to think about scenery. In fact, they sat huddled together in the wheelbarrow with their backs towards the view.

It had certainly been a considerable shock to the girls to find, on arriving after the holidays, that their popular Principal had deserted them in so sudden a fashion....