A Handbook to the Works of Browning (6th ed.) 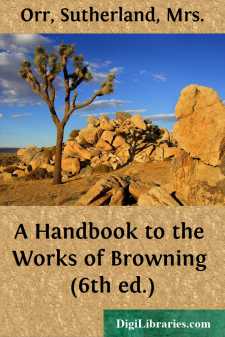 These three poems are Mr. Browning's first, and they are also, as I have said, the one partial exception to the unity and continuousness of his work; they have, at least, one common characteristic which detaches them from the remainder of it. Each is in its different way the study of a human spirit, too ambitious to submit to the limits of human existence, and which learns humility in its unsuccessful conflict with them. This ambition is of its nature poetic, and seems so much in harmony with Mr. Browning's mind—young and untutored by experience as it then was, full of the consciousness of its own powers as it must have been—that it is difficult not to recognize in it a phase of his own intellectual life. But if it was so, it is one which he had already outgrown, or lived much more in fancy than in fact. His sympathy with the ambition of Paracelsus and Sordello is steadily counteracted by his judgment of it; and we are only justified in asserting what is beyond dispute: that these poems represent an introductory phase of the author's imagination, one which begins and ends in them. The mind of his men and women will be exercised on many things, but never again so much upon itself. The vivid sense of their personality will be less in their minds than in his own.

This poem is, as its title declares, a fragment of a confession. The speaker is a man, probably still young; and Pauline, the name of the lady who receives the confession, and is supposed to edit it. It is not, however, "fragmentary" in the sense of revealing only a small part of the speaker's life, or of only recording isolated acts, from which the life may be built up. Its fragmentary character lies in this: that, while very explicit as a record of feeling and motive, it is entirely vague in respect to acts. It is an elaborate retrospect of successive mental states, big with the sense of corresponding misdeeds; and pointing among these to some glaring infidelities to Pauline, the man's constant love and friend; but on the whole conveying nothing beyond an impression of youthful excesses, and of an extreme and fantastic self-consciousness which has inspired these excesses, and which now magnifies and distorts them.

An ultra-consciousness of self is in fact the key-note of the whole mental situation. Pauline's lover has been a prey to the spiritual ambition so distinctly illustrated in these three first poems; and, unlike Paracelsus and Sordello, he has given it no outlet in unselfish aims. His life has not been wholly misspent; he is a poet and a student; he has had dreams of human good; he has reverenced great men: and never quite lost the faith in God, and the sense of nearness to Him; and he alleges some of these facts in deprecation of his too harsh verdict upon himself. But his ultimate object has been always the gratification of Self—the ministering to its pleasures and to its powers; and this egotism has become narrower and more consuming, till the thirst for even momentary enjoyment has banished the very belief in higher things....