A Handbook of the English Language 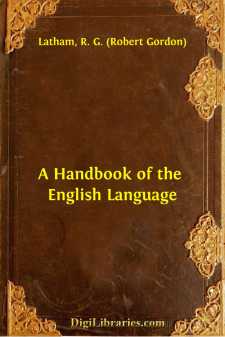 GERMANIC ORIGIN OF THE ENGLISH LANGUAGE.—DATE.

§ 1. The first point to be remembered in the history of the English language, is that it was not the primitive and original tongue of any of the British Islands, nor yet of any portion of them. Indeed, of the whole of Great Britain it is not the language at the present moment. Welsh is spoken in Wales, Manks in the Isle of Man, and Scotch Gaelic in the Highlands of Scotland; besides which there is the Irish Gaelic in Ireland.

§ 2. The next point to be considered is the real origin and the real affinities of the English language.

Its real origin is on the continent of Europe, and its real affinities are with certain languages there spoken. To speak more specifically, the native country of the English language is Germany; and the Germanic languages are those that are the most closely connected with our own. In Germany, languages and dialects allied to each other and allied to the mother-tongue of the English have been spoken from times anterior to history; and these, for most purposes of philology, may be considered as the aboriginal languages and dialects of that country.

Respecting the tribes by which they were made, the current opinion was, that they were chiefly, if not exclusively, those of the Jutes, the Saxons, and the Angles.

The particular chieftains that headed each descent were also supposed to be known, as well as the different localities upon which they descended.[] These were as follows:—

First settlement of invaders from Germany.—The account of this gives us A.D. 449 for the first permanent Germanic tribes settled in Britain. Ebbsfleet, in the Isle of Thanet, was the spot where they landed; and the particular name that these tribes gave themselves was that of Jutes. Their leaders were Hengist and Horsa. Six years after their landing they had established the kingdom of Kent; so that the county of Kent was the first district where the original British was superseded by the mother-tongue of the present English, introduced from Germany.

Second settlement of invaders from Germany.—A.D. 477 invaders from Northern Germany made the second permanent settlement in Britain. The coast of Sussex was the spot whereon they landed. The particular name that these tribes gave themselves was that of Saxons. Their leader was Ella. They established the kingdom of the South Saxons (Sussex or Suð-Seaxe); so that the county of Sussex was the second district where the original British was superseded by the mother-tongue of the present English, introduced from Germany.