A Handbook of Health 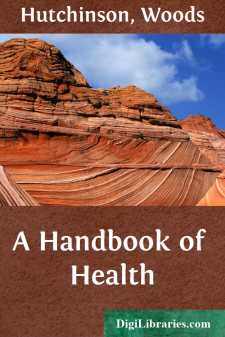 Looking upon the human body from the physical point of view as the most perfect, most ingeniously economical, and most beautiful of living machines, the author has attempted to write a little handbook of practical instruction for the running of it.

And seeing that, like other machines, it derives the whole of its energy from its fuel, the subject of foods—their properties, uses, and methods of preparation—has been gone into with unusual care. An adequate supply of clean-burning food-fuel for the human engine is so absolutely fundamental both for health and for efficiency—we are so literally what we have eaten—that to be well fed is in very fact two-thirds of the battle of life from a physiological point of view. The whole discussion is in accord with the aim, kept in view throughout the book, of making its suggestion and advice positive instead of negative, pointing out that, in the language of the old swordsman, "attack is the best defense." If we actively do those things that make for health and efficiency, and which, for the most part, are attractive and agreeable to our natural instincts and unspoiled tastes,—such as exercising in the open air, eating three square meals a day of real food, getting nine or ten hours of undisturbed sleep, taking plenty of fresh air and cold water both inside and out,—this will of itself carry us safely past all the forbidden side paths without the need of so much as a glance at the "Don't" and "Must not" with which it has been the custom to border and fence in the path of right living.

On the other hand, while fully alive to the undesirability, and indeed wickedness, of putting ideas of dread and suffering into children's minds unnecessarily, yet so much of the misery in the world is due to ignorance, and could have been avoided if knowledge of the simplest character had been given at the proper time, that it has been thought best to set forth the facts as to the causation and nature of the commonest diseases, and the methods by which they may be avoided. This is peculiarly necessary from the fact that most of the gravest enemies of mankind have come into existence within a comparatively recent period of the history of life,—only since the beginning of civilization, in fact,—so that we have as yet developed no natural instincts for their avoidance.

Nor do we admit that we are adding anything to the stock of fears in the minds of children—the nurse-maid and the bad boys in the next alley have been ahead of us in this respect. The child-mind is too often already filled with fears and superstitions of every sort, passed down from antiquity. Modern sanitarians have been accused of merely substituting one fear for another in the mind of the child—bacilli instead of bogies. But, even if this be true, there are profound and practical differences between the two terrors. One is real, and the other imaginary. A child cannot avoid meeting a bacillus; he will never actually make the acquaintance of a bogie....