A Guide for the Religious Instruction of Jewish Youth 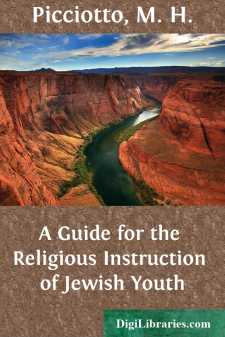 the name of Isaac Reggio of Goritz, is now a celebrity in the Hebrew literary world. A man of vast mind, a profound scholar, a philosopher, and an elegant writer, his numerous works on Theology, Hermeneutics, Philology, History, and Literature, written in Hebrew, in Italian, and in German, have tended much to revive the taste for Hebrew literature, and to reconcile modern education to the study of Jewish antiquities.

The present little book is one of his latest productions in the Italian language. In a style at once concise and perspicuous, and with a form of reasoning suited to the scientific requirements of the times, he introduces the student to an enlarged view of Religion, ascends with him to the heavenly source from which it emanated, and leads him, through the paths of virtue and love, to the comprehension and admiration of the objects contemplated by it. In short, he teaches—if I am permitted the expression—the philosophy of religion.

I humbly, but firmly believe that, in the hands of able Jewish teachers, this work will considerably assist them to infuse into religious instruction a little more spirituality, and to impart a more comprehensive view of religion, than the routine of former days deemed necessary, and that, by so doing, they will be better able to enlarge and satisfy the minds, improve the hearts, and generally advance the moral education of youth.

Notwithstanding the well-intentioned and beneficial efforts of many friends of education among the British Jews, and the praiseworthy exertions of some excellent teachers, the education of the mass is, we must confess, still in a condition, in which the attainment of those objects has not ceased to be a desideratum. We may or may not be on a level with our neighbours, but we have very urgent and special calls of our own for self-improvement, we have a particular mission to fulfil, with its concomitant duties. Such self-improvement and such duties are demanded by the spirit—not of the age, as is too commonly said and believed—but of an age which began thirty-two centuries ago, at the revelation on Mount Sinai—the spirit of Judaism, of well-understood Judaism. Our age, with all its boasted and undeniable progress, is still, morally, far below the type designed by Providence for humanity in the Sinaitic dispensation, far behind the spirit which dictated and pervades the pages of the sacred volume, and which, when thoroughly understood and generally acted upon, must bring about the supreme reign of justice, charity, and universal love, and—as far as attainable—the ultimate perfection of mankind.

It has appeared to me that these truths find a plain and logical exposition in this little work, and that its contents may not prove uninteresting even to the general reader. I also believe that a more correct apprehension of the true spirit and principles of Judaism by our Christian brethren, than is commonly arrived at, will have the twofold effect, of gradually leading to a larger measure of justice being dealt to the Jew, and inducing the latter to a higher degree of self-respect. For these several reasons, I have volunteered to translate it for the use of the English public, while other versions are being prepared in Germany and France. I trust that those to whose lot has fallen the honourable but arduous task of educating and informing young minds, and to whom it is more particularly addressed, will give it their earnest consideration, for the sake of whatever good they may cull from it, as a material in aid, while they are laying the foundations of virtue in the hearts of the rising generation.

in the exercise of the sacred mission entrusted to you by Providence—that of educating our youth to piety and religion—it must have frequently occurred to you, to wish that such an instruction could be imparted, not in the shape of dogmas demanding to be admitted without investigation, but as doctrines addressed to the intellect by proper demonstrations, and finding their way to the heart by stimulating its noblest feelings. The little book that I present to you is intended to satisfy, at least in part, that wish. You will not find in it a complete treatise on Jewish Theology, or a systematic catechism, but only the essential elements, which may serve to the future elaboration of both. You will find deposited in it the rough materials, which some abler hands will perhaps one day employ in constructing an edifice, in which our youth may find a safe refuge from the storms of doubt, unbelief, and irreligion. I have purposed to avoid all exuberant ornaments of style, all pompous parade of erudition, and contented myself with a plain diction, and a strict laconism. I have not quoted authors who preceded me in the same field; I have not called up for investigation what of valuable or defective could be found in them; in short, I have not instituted comparisons, scientific disquisitions, or critical examinations of the opinions of others. A series of aphorisms, simple, plain, unadorned, of easy understanding, drawn from no other source than the Divine Word, presented with the greatest possible perspicuity and precision, progressing in a regular chain of consequential propositions, and containing in few words the most important points of the Israelitish creed—that is the form in which I have thought more proper to present to those, who are already versed in the Bible and in Hebrew literature, a skeleton of the vast religious science, in which they may perceive at a glance the principal characteristic of Judaism, its various ramifications, subsidiary parts, and special tendencies; they may then easily discover and account for the multifarious phases, in which it manifested itself in the various epochs of the universal history of mankind. To supply the deficiencies, to adorn those naked propositions, to provide them with evidence deduced from the sacred text, to enlarge them with appropriate applications, to illustrate them with examples, in fine, to reduce the whole into such a catechistic form as will suit a sound system of instruction—such is the task which remains entrusted to your intelligence, and to your zeal. By employing the proffered materials with that discretion which is peculiar to your ministry, with that method which the tender minds of your pupils require, and with the love inspired by the sublimity and importance of the subject, yours will be the merit of having propagated the seeds of truth that will bring forth charity and universal edification; to me suffices the happiness of having, in some degree, contributed to so noble a work.