A Great Emergency and Other Tales 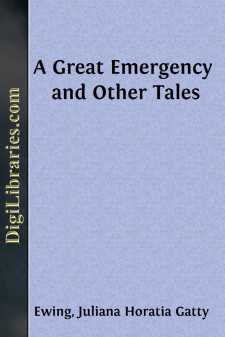 We were very happy—I, Rupert, Henrietta, and Baby Cecil. The only thing we found fault with in our lives was that there were so few events in them.

It was particularly provoking, because we were so well prepared for events—any events. Rupert prepared us. He had found a fat old book in the garret, bound in yellow leather, at the end of which were "Directions how to act with presence of mind in any emergency;" and he gave lectures out of this in the kitchen garden.

Rupert was twelve years old. He was the eldest. Then came Henrietta, then I, and last of all Baby Cecil, who was only four. The day I was nine years old, Rupert came into the nursery, holding up his handsome head with the dignified air which became him so well, that I had more than once tried to put it on myself before the nursery looking-glass, and said to me, "You are quite old enough now, Charlie, to learn what to do whatever happens; so every half-holiday, when I am not playing cricket, I'll teach you presence of mind near the cucumber frame, if you're punctual. I've put up a bench."

I thanked him warmly, and the next day he put his head into the nursery at three o'clock in the afternoon, and said—"The lecture."

I jumped up, and so did Henrietta.

"It's not for girls," said Rupert; "women are not expected to do things when there's danger."

"We take care of them" said I, wondering if my mouth looked like Rupert's when I spoke, and whether my manner impressed Henrietta as much as his impressed me. She sat down again and only said, "I stayed in all Friday afternoon, and worked in bed on Saturday morning to finish your net."

"Come along," said Rupert. "You know I'm very much obliged to you for the net; it's a splendid one."

"I'll bring a camp-stool if there's not room on the bench," said Henrietta cheerfully.

"People never take camp-stools to lectures," said Rupert, and when we got to the cucumber frame we found that the old plank, which he had raised on inverted flower-pots, would have held a much larger audience than he had invited. Opposite to it was a rhubarb-pot, with the round top of a barrel resting on it. On this stood a glass of water. A delightful idea thrilled through me, suggested by an imperfect remembrance of a lecture on chemistry which I had attended.

"Will there be experiments?" I whispered.

"I think not," Henrietta replied. "There are glasses of water at the missionary meetings, and there are no experiments."

Meanwhile Rupert had been turning over the leaves of the yellow leather book. To say the truth, I think he was rather nervous; but if we have a virtue among us it is that of courage; and after dropping the book twice, and drinking all the water at a draught, he found his place, and began.

"How to act in an emergency."

"What's an emergency?" I asked. I was very proud of being taught by Rupert, and anxious to understand everything as we went along.

"You shouldn't interrupt," said Rupert, frowning. I am inclined now to think that he could not answer my question off-hand; for though he looked cross then, after referring to the book he answered me: "It's a fire, or drowning, or an apoplectic fit, or anything of that sort." After which explanation, he hurried on. If what he said next came out of his own head, or whether he had learned it by heart, I never knew.

"—apoplectic fit," I suggested. I was giving the keenest attention, and Rupert had hesitated, the wind having blown over a leaf too many of the yellow leather book.

"An emergency," he shouted, when he had found his place. "Now we'll have one each time. The one for to-day is—How to act in a case of drowning."

To speak the strict truth, I would rather not have thought about drowning....