A Golden Venture The Lady of the Barge and Others, Part 11. 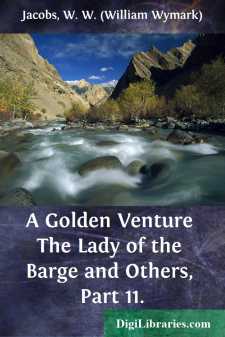 The elders of the Tidger family sat at breakfast—Mrs. Tidger with knees wide apart and the youngest Tidger nestling in the valley of print-dress which lay between, and Mr. Tidger bearing on one moleskin knee a small copy of himself in a red flannel frock and a slipper. The larger Tidger children took the solids of their breakfast up and down the stone-flagged court outside, coming in occasionally to gulp draughts of very weak tea from a gallipot or two which stood on the table, and to wheedle Mr. Tidger out of any small piece of bloater which he felt generous enough to bestow.

His wife's elder sister shook her head, and passing the remains of her slice to one of her small nephews, leaned back in her chair. "No appetite, Tidger," she said, slowly.

"You should go in for carpentering," said Mr. Tidger, in justification of the huge crust he was carving into mouthfuls with his pocket-knife. "Seems to me I can't eat enough sometimes. Hullo, who's the letter for?"

He took it from the postman, who stood at the door amid a bevy of Tidgers who had followed him up the court, and slowly read the address.

Mrs. Pullen broke the envelope, and after a somewhat lengthy search for her pocket, fumbled therein for her spectacles. She then searched the mantelpiece, the chest of drawers, and the dresser, and finally ran them to earth on the copper.

She was not a good scholar, and it took her some time to read the letter, a proceeding which she punctuated with such "Ohs" and "Ahs" and gaspings and "God bless my souls" as nearly drove the carpenter and his wife, who were leaning forward impatiently, to the verge of desperation.

"Who's it from?" asked Mr. Tidger for the third time.

"I don't know," said Mrs. Pullen. "Good gracious, who ever would ha' thought it!"

"Why don't people write their names plain?" demanded his sister-in-law, impatiently. "It's got a printed name up in the corner; perhaps that's it. Well, I never did—I don't know whether I'm standing on my head or my heels."

"You're sitting down, that's what you're a-doing," said the carpenter, regarding her somewhat unfavourably.

"Perhaps it's a take-in," said Mrs. Pullen, her lips trembling. "I've heard o' such things. If it is, I shall never get over it—never."

"It don't look like a take-in," soliloquized Mrs. Pullen, "and I shouldn't think anybody'd go to all that trouble and spend a penny to take in a poor thing like me."

Mr. Tidger, throwing politeness to the winds, leaped forward, and snatching the letter from her, read it with feverish haste, tempered by a defective education.

"What is?" asked Mrs. Tidger, impatiently.

"What is it?" screamed Mrs. Tidger, wrought beyond all endurance....