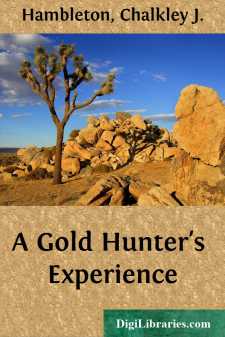 Early in the summer of 1860 I had a bad attack of gold fever. In Chicago the conditions for such a malady were all favorable. Since the panic of 1857 there had been three years of general depression, money was scarce, there was little activity in business, the outlook was discouraging, and I, like hundreds of others, felt blue.

Gold had been discovered in the fall of 1858 in the vicinity of Pike's Peak, by a party of Georgian prospectors, and for several years afterward the whole gold region for seventy miles to the north was called "Pike's Peak." Others in the East heard of the gold discoveries and went West the next spring; so that during the summer of 1859 a great deal of prospecting was done in the mountains as far north as Denver and Boulder Creek.

Those who returned in the autumn of that year, having perhaps claims and mines to sell, told large stories of their rich finds, which grew larger as they were repeated, amplified and circulated by those who dealt in mining outfits and mills. Then these accounts were fed out to the public daily in an appetizing way by the newspapers. The result was that by the next spring the epidemic became as prevalent in Chicago as cholera was a few years later.

Four of the fever stricken ones, Enos Ayres, T. R. Stubbs, John Sollitt and myself, formed a partnership, raised about $9,000 and went to work to purchase the necessary outfit for gold mining. Mr. Ayres furnished a larger share of the capital than any of the others and was not to go with the expedition, but might join us the following year. Mr. Stubbs and I were both to go, while Mr. Sollitt was to be represented by a substitute, a relative whose name was also John Sollitt, and who had been a farmer and butcher and was supposed to know all about oxen. Mr. Stubbs was a good mechanic, an intelligent, well-read man, and ten years before had been to California in search of gold.

Our outfit consisted of a 12-stamp quartz mill with engine and boiler, and all the equipments understood to be necessary for extracting gold from the rock, including mining tools, powder, quicksilver, copper plate and chemicals; also a supply of provisions for a year. The staple articles of the latter were flour, beans, salt pork, coffee and sugar. Then we had rice, cornmeal, dried fruit, tea, bacon and a barrel of syrup; besides a good supply of hardtack, crackers and cheese for use while crossing the plains, when a fire for cooking might not be found practicable. These things were all purchased in Chicago, together with the fourteen wagons necessary to carry them across the plains. Then all were shipped by rail to St. Joseph, Mo., where the oxen were to be purchased. The entire outfit when loaded on the cars, weighed twenty-four tons.

I stayed in Chicago till the last to help purchase and forward the outfit and supplies, while Stubbs and Sollitt (the substitute) went to St. Joe to receive and load them on the wagons and to purchase the oxen.

On the 1st day of August, all was ready, and we ferried our loaded wagons and teams across the Missouri River into Kansas to make a final start next morning into regions to us unknown. Stubbs started the same day by stage for the mountains, to prospect and look out for a favorable location and then to meet the train when it arrived at Denver. Sollitt was to be trainmaster, which involved the oversight and direction of the teams and drivers, and the duty of frequently going ahead to pick out the best road and select a favorable place to camp at night, where water and grass could be had. I was the general business man of the expedition, had full power of attorney from Mr. Ayres to represent and manage his interest, and hence I had the control and responsibility in my hands and practically decided all important questions relating to the business....