A Glossary of Provincial Words & Phrases in use in Somersetshire 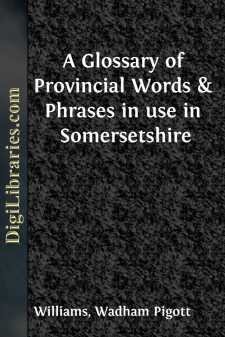 The following paper from the pen of Dr. Prior was read at a Conversazione of the Society at Taunton, in the winter of 1871, and as it treats the subject from a more general point of view than is usually taken of it, we print it with his permission as an introduction to our vocabulary:—

On the Somerset Dialects.

The two gentlemen who have undertaken to compile a glossary of the Somerset dialect, the Rev. W. P. Williams and Mr. W. A. Jones, have done me the honour to lend me the manuscript of their work; and the following remarks which have occurred to me upon the perusal of it I venture to lay before the Society, with the hope that they may be suggestive of further enquiry.

Some years ago, while on a visit at Mr. Capel’s, at Bulland Lodge, near Wiveliscombe, I was struck with the noble countenance of an old man who was working upon the road.  Mr. Capel told me that it was not unusual to find among the people of those hills a very refined cast of features and extremely beautiful children, and expressed a belief that they were the descendants of the ancient inhabitants of the country, who had been dispossessed of their land in more fertile districts by conquerors of coarser breed.  A study of the two dialects spoken in the county (for two there certainly are) tend, I think, to corroborate the truth of this opinion.

It will be urged that during the many centuries that have elapsed since the West Saxons took possession of this part of England the inhabitants must have been so mixed up together that all distinctive marks of race must long since have been obliterated.  But that best of teachers, experience, shows that where a conquered nation remains in greatly superior numbers to its conqueror, and there is no artificial bar to intermarriages, the latter, the conqueror, will surely be absorbed into the conquered.  This has been seen in our own day in Mexico, where the Spaniards, who have occupied and ruled the country nearly four hundred years, are rapidly approaching extinction.  Nay, we find that even in a country like Italy, where the religion, language, and manners are the same, the original difference of races is observable in different parts of the peninsula after many centuries that they have been living side by side.

It seems to be a law of population that nations composed of different stocks or types can only be fused into a homogeneous whole by the absorption of one into the other—of the smaller into the greater, or of the town-dwellers into the country stock.  The result of this law is, that mixed nations will tend with the progress of time to revert to their original types, and either fall apart into petty groups and provincial distinctions, as in Spain, or will eliminate the weaker or less numerous race, the old or the new, as the one or the other predominates.  The political character of our English nation has changed from that which it was in the time of the Plantagenets by discharging from it the Norman blood; and our unceasing trouble with the Irish is a proof that we have not yet made Englishmen of them, as perhaps we never shall.  A very keen observer, M. Erckman, in conversation with the Times correspondent, of the 21st December, 1870, made a remark upon the state of France which is so illustrative of this position, as regards that country, that I cannot forbear to give it in his own words.  The correspondent had expressed his fear that, if the war were prolonged, France would lapse into anarchy.  “It is not that,” said M. Erckman, “which fills me with apprehension.  It is rather the gulf which I begin to fear is widening between the two great races of France.  The world is not cognisant of this; but I have watched it with foreboding.”  “Define me the two types.”  “They shade into each other; but I will take, as perhaps extremes, the Gascon, and the Breton.”  “He proceeded,” says the correspondent, “to sketch the characteristics of the people of Provence, Languedoc, and Gascony, and to contrast them with those of Brittany, middle, and north France, their idiosyncrasies of race, feeling, religion, manners—their diverse aspirations, their antagonisms.  For sufficient reasons I pass over his remarks.”  A still more striking case of the kind is that of Egypt, a country that for more than 2,000 years has been subject to foreign conquerors, Persians, Greeks, Romans, Arabs, Turks, and Mamelukes, and the annual influx of many thousand negro slaves, and where, notwithstanding all this, the peasantry, as far as can be judged by a careful examination of the skull, is identical with the population of the Pharaonic period....