A Girl in Ten Thousand 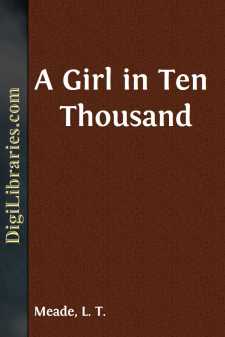 "You are the comfort of my life, Effie. If you make up your mind to go away, what is to become of me?"

The speaker was a middle-aged woman. She was lying on a sofa in a shabby little parlor. The sofa was covered with horse-hair, the room had a faded paper, and faded chintz covered the shabby furniture. The woman's pleading words were emphasized by her tired eyes and worn face. She looked full at the young girl to whom she spoke.

"What shall I do without you, and what will your father say?"

"I have made up my mind," said Effie. "I don't want to be unkind to you, mother,—I love you more than words can say,—but I must go out into the world. I must live my life like other girls."

"You had none of these ideas until you met Dorothy Fraser."

"Yes, I have had them for a long time; Dorothy has given them emphasis, that's all. Dorothy's mother did not like her to go away, but now she is glad. She says that nothing has made Dorothy into so fine a woman as taking her life into her own hands, and making the best she can of it. Before I go, mother, I will get Agnes to learn all my duties; she shall help you. She is nearly fourteen; she ought to be of use to you, ought she not?"

"She would not be like you," replied Mrs. Staunton. "She is very young, remember, and is at school most of the day. I won't argue with you, Effie, but it tires me even to think of it."

Effie sighed. She bent down and kissed her mother. Her words had sounded hard and almost defiant, but there was nothing at all hard or defiant about her sweet face. She was a dark-eyed girl, and looked as if she might be any age between seventeen and twenty. There was a likeness between her and her mother quite sufficient to show their relationship; both faces were softly curved, both pairs of eyes were dark, and the mother must have been even prettier in her youth than the daughter was now.

"As I say," continued Mrs. Staunton, "it fills me with terror to think of doing without you."

"Try not to think of it, mother. I am not going yet, I only want to go very much indeed. I am going to talk to father about it. I want to have the thing arranged while Dorothy is here."

Here Effie went suddenly on her knees by the sofa and threw one young arm protectingly round her mother.

"You do not know what it means to me," she said. "When Dorothy talks of the full life, the keen interest, the battle, the thrill of living, I feel that I must go into it—I must."

After a pause, she said, and her words came out even without a sigh:

"The question, after all, is this, Effie: What will your father say?"

"When he thinks it out carefully he will be pleased," replied Effie. "He must be interested in the profession I want to take up. How often—oh, how often, mother—has he groaned and sighed at the bad nursing which his patients get!...