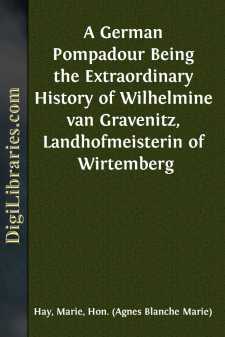 'The Past that is not overpast,

In a dusty, time-soiled packet of legal papers which had lain untouched for nigh upon two hundred years, the extraordinary history of Wilhelmine von Grävenitz is set forth in all the colourless reticence of official documents. And yet something of the thrill of the superstitious fear, and the virtuous disapproval of the lawyers who composed these writings, pierces through the stilted phrases. Like a faint fragrance of faded rose-leaves, a breath of this woman's charm seems to cling and elusively to peep out of the curt record of her crimes. Enough at least to incite the wanderer in History's byways to a further study of this potent German forerunner of the Pompadour.

To search through the Stuttgart archives, to ferret out forgotten books in dusty old book-shops, to fit together the links in the chain of events of the woman's story, to haunt the scenes of bygone splendour in deserted palace and castle, old-world garden and desolate mansion; such has been the delightful labour which has gone to the telling of the true history of the Grävenitz. The Land-despoiler the downtrodden peasantry and indignant burghers named her, for they hated her as their sort must ever hate the beautiful, elegant, haughty woman of the great world. They called her sinner, which she was; and she called them canaille, which they probably were.

And traces of all this linger in Württemberg. They still deem the Countess Grävenitz a subject to be mentioned with bated breath—a thing too evil, too terrible, for polite conversation. The very guides at Ludwigsburg slur over her name, and if they go so far as to mention her, they say: 'Ja, das war aber eine schlimme Dame,' and turn the talk to something else. But her memory lives magnificently in the great palace built for her, in her little 'Château Joyeux' of La Favorite, and in the many beautiful properties which belonged to this extravagant Land-despoiler. She came to Württemberg when the country was at a low financial ebb. Louis xiv. had preyed upon the land for years. Robber raids they called these wars which he waged for trumped-up pretexts. After these invasions came the war of the Spanish succession, and Württemberg lying on the high-road from France to Austria, the belligerent armies swept over the Swabian land on their way to battle. The Duke of Württemberg, loyal to his Suzerain the Emperor at Vienna, joined in the fray and fought bravely at the side of Marlborough and Eugene of Savoy against the French terror. When Blenheim had been fought and won, the war-tide swept northwards to the Netherlands, leaving Southern Germany for the nonce at rest, and Eberhard Ludwig of Württemberg repaired to Stuttgart to attend to his Duchy's government. Now began the love-story of his life, the long-drawn episode which made his name a target for the gossip and scandal of early eighteenth-century Germany; the episode which changed the simple, stiff family life of the Württemberg ducal circle to a brilliant, festive court, which travellers tell us in their memoirs vied in magnificence with the glories of Versailles itself....