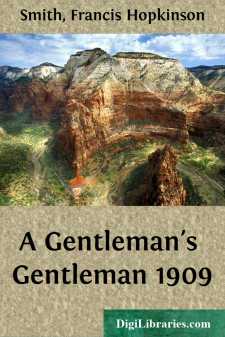 I had left Sandy MacWhirter crooning over his smouldering wood fire the day Boggs blew in with news of the sale of Mac's two pictures at the Academy, and his reply to my inquiry regarding his future plans (vaguely connected with a certain girl in a steamer chair), "By the next steamer, my boy," still rang in my ears, but my surprise was none the less genuine when I looked up from my easel, two months later, at Sonning-on-the-Thames and caught sight of the dear fellow, with Lonnegan by his side, striding down the tow-path in search of me.

"By the Great Horn Spoon!" came the cry. And the next minute his big arms were about my shoulders, his cheery laugh filling the summer air.

Lonnegan's greeting was equally hearty and spontaneous, but it came with less noise.

"He's been roaring that way ever since we left London," said the architect. "Ever since we landed, really," and he nodded at Mac. "Awfully glad to see you, old man!"

The next moment the three of us were flat on the grass telling our experiences, the silver sheen of the river flashing between the low-branched trees lining the banks.

Mac had disappeared the morning after their arrival; had remained away two weeks, reappearing again with a grin on his face that had frozen stiff and had never relaxed its grip. "You can still see it; turn your head, Mac, and let the gentleman see your smile." Since that time he had spent his nights writing letters, and his days poring aver the morning's mail. "Got his pocket full of them now, and is so happy he's no sort of use to anybody." Mac now got his innings:

Lonnegan's airs had been insufferable and his ignorance colossal. What time he could spare from his English tailor—"and you just ought to see his clothes, and especially his checkerboard waistcoats"—had been spent in abusing everything in English art that wasn't three hundred years old, and going into raptures over Lincoln Cathedral. The more he saw of Lonnegan the more he was convinced that he had missed his calling. He might succeed as a floorwalker in a department store, where his airs and his tailor-made upholstery would impress the hayseeds from the country, but, as for trying to be—The rest was lost in a gurgle of smothered laughter, Lonnegan's thin, white fingers having by this time closed over the painter's windpipe.

I had been at work a month; had my present quarters at the White Hart Inn, within a stone's throw of where we lay sprawled with our faces to the sun—the loveliest inn, by the way, on the Thames, and that was saying a lot—with hand-polished tables, sleeve and trouser-polished arm-chairs, Chippendale furniture, barmaids, pewter mugs, old and new ale, tough bread, tender mutton, tarts—gooseberry and otherwise; strawberries—two would fill a teacup—and roses! Millions of roses! "Well, you fellows just step up and look at 'em."

"And not a place to put your head," said Mac.

"Been there," replied Lonnegan. "The only decent rooms are reserved for a bloated American millionaire who arrives to-day—everything else chock-a-block except two bunks under the roof, full of spiders."

Mac drew up one of his fat legs, stretched his arms, pushed his slouch hat from his forehead—he was still on his back drinking in the sunshine—and with a yawn cried:

"They ought to be exterminated."

"No, millionaires. They throw their money away like water; they crowd the hotels. Nothing good enough for them. Prices all doubled, everything slimed up by the trail of their dirty dollars....