A Gentleman Vagabond and Some Others 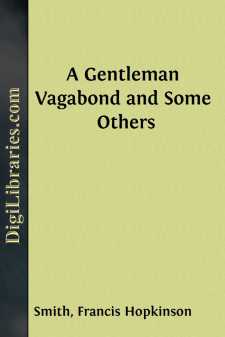 A KNIGHT OF THE LEGION OF HONOR

It was in the smoking-room of a Cunarder two days out. The evening had been spent in telling stories, the fresh-air passengers crowding the doorways to listen, the habitual loungers and card-players abandoning their books and games.

When my turn came,—mine was a story of Venice, a story of the old palace of the Barbarozzi,—I noticed in one corner of the room a man seated alone wrapped in a light shawl, who had listened intently as he smoked, but who took no part in the general talk. He attracted my attention from his likeness to my friend Vereschagin the painter; his broad, white forehead, finely wrought features, clear, honest, penetrating eye, flowing mustache and beard streaked with gray,—all strongly suggestive of that distinguished Russian. I love Vereschagin, and so, unconsciously, and by mental association, perhaps, I was drawn to this stranger. Seeing my eye fixed constantly upon him, he threw off his shawl, and crossed the room.

"Pardon me, but your story about the Barbarozzi brought to my mind so many delightful recollections that I cannot help thanking you. I know that old palace,—knew it thirty years ago,—and I know that cortile, and although I have not had the good fortune to run across either your gondolier, Espero, or his sweetheart, Mariana, I have known a dozen others as romantic and delightful. The air is stifling here. Shall we have our coffee outside on the deck?"

When we were seated, he continued, "And so you are going to Venice to paint?"

"Me? Oh, to the Engadine to rest. American life is so exhausting that I must have these three months of quiet to make the other nine possible."

The talk drifted into the many curious adventures befalling a man in his journeyings up and down the world, most of them suggested by the queer stories of the night. When coffee had been served, he lighted another cigar, held the match until it burned itself out,—the yellow flame lighting up his handsome face,—looked out over the broad expanse of tranquil sea, with its great highway of silver leading up to the full moon dominating the night, and said as if in deep thought:—

"And so you are going to Venice?" Then, after a long pause: "Will you mind if I tell you of an adventure of my own,—one still most vivid in my memory? It happened near there many years ago." He picked up his shawl, pushed our chairs close to the overhanging life-boat, and continued: "I had begun my professional career, and had gone abroad to study the hospital system in Europe. The revolution in Poland—the revolt of '62—had made traveling in northern Europe uncomfortable, if not dangerous, for foreigners, even with the most authentic of passports, and so I had spent the summer in Italy. One morning, early in the autumn, I bade good-by to my gondolier at the water-steps of the railroad station, and bought a ticket for Vienna. An important letter required my immediate presence in Berlin.

"On entering the train I found the carriage occupied by two persons: a lady, richly dressed, but in deep mourning and heavily veiled; and a man, dark and smooth-faced, wearing a high silk hat. Raising my cap, I placed my umbrella and smaller traps under the seat, and hung my bundle of traveling shawls in the rack overhead. The lady returned my salutation gravely, lifting her veil and making room for my bundles. The dark man's only response was a formal touching of his hat-brim with his forefinger.

"The lady interested me instantly. She was perhaps twenty-five years of age, graceful, and of distinguished bearing. Her hair was jet-black, brushed straight back from her temples, her complexion a rich olive, her teeth pure white. Her lashes were long, and opened and shut with a slow, fan-like movement, shading a pair of deep blue eyes, which shone with that peculiar light only seen when quick tears lie hidden under half-closed lids. Her figure was rounded and full, and her hands exquisitely modeled....