A General Plan for a Mail Communication by Steam, Between Great Britain and the Eastern and Western Parts of the World 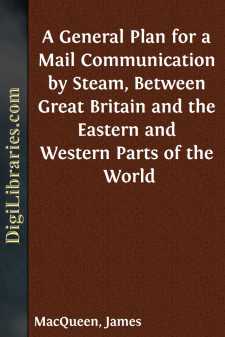 Startling as the subject of connecting China and New South Wales with Great Britain, through the West Indies, may at first sight appear, both as regards time and expense, still few things are more practicable. The labour and expense of crossing the Isthmus of America, either by Panama or by Lake Nicaragua, by a land conveyance, is trifling. With eight steam-boats, ONLY FOUR ADDITIONAL to the number already in the West Indies, added to the present sailing-packet establishment, the whole Plan for the Western World, extending it westward to China and New South Wales, can, in the mean time, as the following pages will show you, be put into execution to the fullest extent, with a very great saving in time, and with very great regularity. A water communication moreover will, I feel convinced, and at no distant day, be carried through the American Isthmus—say by Lake Nicaragua—when the sailing packets for the Pacific may run direct between Jamaica and Sydney, New South Wales, and Canton-China.

In the estimate for the cost of steam-boats to be employed in the service proposed, I have been chiefly guided by, and adhere to, the statement made by that able and practical engineer Mr. Napier, of Glasgow, in his evidence to the Post-office Commissioners in 1836, that steam-boats of 240-horse power, and 620 tons burthen, could be furnished at from 24,000l. to 25,000l. At this rate the total yearly cost of mail communications by the aid of steam, to every quarter which has been adverted to in the subsequent pages, will be as stated in the following brief summary. Reference No. 1, shows the expenditure, keeping the Red Sea route confined to India only, and extending the communication to China and Sydney by the Pacific, from Panama or Rialejo. No. 2, the expense, confining the communication by the Cape of Good Hope to India only, and extending the communication to Canton, &c. across the Pacific as before. No. 3, shows the expenditure for the Western World, the work performed by steam in the West Indies, and steam from Falmouth to Fayal, with sailing-packets for the remainder of the work; and the whole expense, by extending sailing-packets to China and Sydney westward across the Pacific, but limiting the communication by the Red Sea to India only. Lastly, No. 4, shows the expenditure of the communications made in a way similar to No. 3, limiting the conveyance by the Cape of Good Hope to India only: (see also No. 2, p. 128.)

It is, however, to that portion connected with the Western World that the immediate and particular attention of yourself and the other members of Her Majesty's Government is particularly requested. The other parts, above alluded to, may hereafter not be deemed unworthy of your consideration, and the consideration of the Public. Carried into effect in a decided manner, and as speedily as the nature and extent of the machinery required will admit, it would produce great and lasting advantages to the British empire, and confer great honour upon the British Government and the splendid Post-office establishment of this country.

Permit me to observe, that the speedy conveyance of mails outwards, to any place, is but a minor point gained, unless the returns are made regular and equally rapid, and so combined, that while every place possible can be embraced in the line, no place shall obtain any undue advantage over another. These points can never be lost sight of in planning or arranging any mail communication, but more especially a communication like that at present proposed.

No narrow or parsimonious views on the part of this great country ought to throw aside the plan particularly alluded to, or leave it to be taken up and split into divisions by parties, perhaps foreigners, who will then not only command the channels of British intelligence, but be enabled to demand what price they please for carrying a large and important portion of the commercial correspondence of this country....