A Full Enquiry into the Nature of the Pastoral (1717) 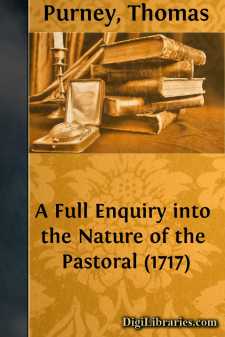 In the preface to each of his volumes of pastorals (Pastorals. After the simple Manner of Theocritus, 1717; Pastorals. viz. The Bashful Swain: and Beauty and Simplicity, 1717) Thomas Purney rushed into critical discussions with the breathlessness of one impatient to reveal his opinions, and, after touching on a variety of significant topics, cut himself short with the promise of a future extensive treatise on pastoral poetry. In 1933 Mr. H.O. White, unable to discover the treatise, was forced to conclude that it probably had never appeared (The Works of Thomas Purney, ed. H.O. White, Oxford, 1933, p. 111), although it had been advertised at the conclusion of Purney's second volume of poetry as shortly to be printed. A copy, probably unique, of A Full Enquiry into the True Nature of Pastoral (1717) was, however, recently purchased by the William Andrews Clark Memorial Library of the University of California, and is here reproduced. Despite the obvious failure of the essay to influence critical theory, it justifies attention because it is the most thorough and specific of the remarkably few studies of the pastoral in an age when many thought it necessary to imitate Virgil's poetic career, and because it is, in many respects, a contribution to the more liberal tendencies within neoclassic criticism. Essentially, the Full Enquiry is a coherent expansion of the random comments collected in the poet's earlier prefaces.

Purney belongs to the small group of early eighteenth-century critics who tended to reject the aesthetics based upon authority and pre-established definitions of the genres, and to evolve one logically from the nature of the human mind and the sources of its enjoyment; in other words, who turned attention from the objective work of art to the subjective response. These men, such as Dennis and Addison, were not searching for an aesthetics of safety, one that would produce unimpeachable correctness; Purney frequently underscored his preference for a faulty and irregular work that is alive to a meticulous but dull one. This is not to be understood as praise of the irregular: the rules of poetry must be established, but they must be founded rationally on the ends of poetry, pleasure and profit, and the psychological process by which they are received, and not solely on the practices and doctrines of the ancients. Taking his cue from the Hobbesian and Lockian methodology of Addison's papers of the pleasures of the imagination without delving into Addison's sensational philosophy, Purney outlined an extensive critical project to investigate (1) "the Nature and Constitution of the human Mind, and what Pleasures it is capable of receiving from Poetry"; (2) the best methods of exciting those pleasures; (3) the rules whereby these methods may be incorporated into literary form (Works, ed. White, p. 48). It is this pattern of thought that regulates the Full Enquiry. Perhaps more than any other poetic type, the pastoral of the Restoration and the early eighteenth century was dominated by classical tradition; the verse composed was largely imitative of the eclogues of Theocritus and Virgil, especially the latter, and criticism of the form was deduced from their practices or from an assumption that the true pastoral of antiquity was the product of the Golden Age....