A Full Description of the Great Tornado in Chester County, Pa. 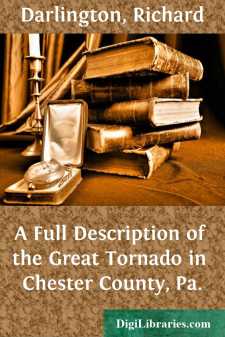 The Summer of 1877 has been remarkable in some localities for the severity of its storms. These, in several instances, have partaken of the character of tornadoes. Mt. Carmel, in Illinois, was nearly destroyed about the 20th of June last; Pensaukee, in Wisconsin, was nearly ruined on the 8th of July, and Pittston, in Massachusetts, suffered terribly from a tornado on the same day. While these great moving storm-clouds occur occasionally in some of the Southern States, they generally move through sparsely settled districts, and the damage inflicted excites but little attention elsewhere. In the West Indies, and in other tropical regions, these tornadoes are of frequent occurrence, and the damage is often fearful, whole towns being completely swept away. In the East Indies, and on the coast of India, these storms are known as Cyclones, because of their rotary motion—the Greek word Ruklos, from which "Cyclone" is derived, meaning "a whirl". A cyclone frequently extends across a great belt, and is from fifty to five hundred miles in width. It may last for hours, and if it occurs on the ocean it destroys most of the vessels within its reach. In the dreadful hurricane that fell upon Coringa, in India, in 1839, the town was destroyed and twenty thousand people lost their lives.

Cyclones or hurricanes of this class, do not occur in our northern States; tornadoes, however, do in rare instances. These extend in width not more than a few hundred yards, or even feet, and come and go within the space of one or two minutes. In power and violence, however, they are as destructive as the cyclones. In tornadoes the storm-cloud, in nearly all instances, has a rotary motion; the wind also sweeping forward progressively at the rate of from five to twenty miles an hour. Science has shown that in the latitude where these rare visitors come, they nearly always proceed from south-west to north-east. In the great Illinois hurricane in May, 1855, that passed over Cook county, it is said that a family of nine persons was carried up in the air in a frame house, four of the nine being killed outright and the remainder severely injured. The house went to pieces amid the fury of the storm. Generally these great storms are accompanied by peculiar electrical phenomena, though not in all instances. Rain and hail often go with them. The storm-cloud of a tornado is nearly always funnel-shaped, the small end of the funnel extending downward. It looks like an immense balloon, and revolves on its axis with fearful rapidity. The air beyond the limits of this cloud is also in rapid motion, but merely partakes of the character of a very high wind and is not particularly destructive. The death-dealing and destructive power of the storm is confined to the limit of the conical cloud. All movements for personal safety must extend entirely beyond the circumference established by the rotary motion. The primary cause of these tornadoes is probably due to a low barometric condition of the atmosphere accompanied by a high temperature, and spreading over an area of very irregular shape....