A Fool for Love 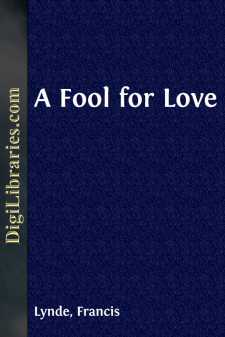 I. IN WHICH WE TAKE PASSAGE ON THE LIMITED

It was a December morning,—the Missouri December of mild temperatures and saturated skies,—and the Chicago and Alton's fast train, dripping from the rush through the wet night, had steamed briskly to its terminal track in the Union Station at Kansas City.

Two men, one smoking a short pipe and the other snapping the ash from a scented cigarette, stood aloof from the hurrying throngs on the platform, looking on with the measured interest of those who are in a melee but not of it.

"More delay," said the cigarettist, glancing at his watch. "We are over an hour late now. Do we get any of it back on the run to Denver?"

The pipe-smoker shook his head.

"Hardly, I should say. The Limited is a pretty heavy train to pick up lost time. But it won't make any particular difference. The western connections all wait for the Limited, and we shall reach the seat of war to-morrow night, according to the Boston itinerary."

Mr. Morton P. Adams flung away the unburned half of his cigarette and masked a yawn behind his hand.

"It's no end of a bore, Winton, and that is the plain, unlacquered fact," he protested. "I think the governor owes me something. I worried through the Tech because he insisted that I should have a profession; and now I am going in for field work with you in a howling winter wilderness because he insists on a practical demonstration. I shall ossify out there in those mountains. It's written in the book."

"Humph! it's too bad about you," said the other ironically. He was a fit figure of a man, clean-cut and vigorous, from the steadfast outlook of the gray eyes and the firm, smooth-shaven jaw to the square fingertips of the strong hands, and his smile was of good-natured contempt. "As you say, it is an outrage on filial complaisance. All the same, with the right-of-way fight in prospect, Quartz Creek Canyon may not prove to be such a valley of dry bones as—Look out, there!"

The shifting-engine had cut a car from the rear of the lately-arrived Alton, and was sending it down the outbound track to a coupling with the Transcontinental Limited. Adams stepped back and let it miss him by a hand's-breadth, and as the car was passing, Winton read the name on the paneling.

"The Rosemary: somebody's twenty-ton private outfit. That cooks our last chance of making up any lost time between this and tomorrow—"

He broke off abruptly. On the square rear observation platform of the private car were three ladies. One of them was small and blue-eyed, with wavy little puffs of snowy hair peeping out under her dainty widow's cap. Another was small and blue-eyed, with wavy masses of flaxen hair caught up from a face which might have served as a model for the most exquisite bisque figure that ever came out of France. But Winton saw only the third.

She was taller than either of her companions—tall and straight and lithe; a charming embodiment of health and strength and beauty: clear-skinned, brown-eyed—a very goddess fresh from the bath, in Winton's instant summing up of her, and her crown of red-gold hair helped out the simile....