A Fleece of Gold; Five Lessons from the Fable of Jason and the Golden Fleece

by Charles Stewart Given 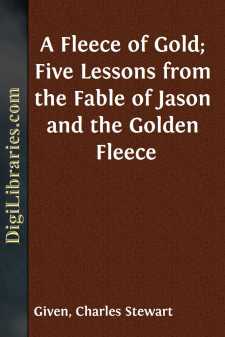 Jason has just stepped over the threshold into the glory of a rich young manhood. And he is careful to select for his expedition some of the choicest heroes of Greece--young, brave, and strong. It has ever been thus. Youth has always been synonymous with adventure. It is a condition which seems inherent; nature instilling into the blood of her sons the very spirit of discontent--of longing to push out from the commonplace scenes of childhood into broader domains of experience.

The very books which most fascinate the boy are those which deal in thrilling tales of adventure. The wily and unscrupulous traffickers in cheap literature have ever been awake to this fact, and their highly-colored productions have been flung from the vicious presses like lava from Pelée to pollute the minds of the young. Why is it that "Robinson Crusoe" and stories of this character hold such a charm for young people, lingering in their minds long after books of a profounder type have been forgotten? It is the love of adventure. To what boy at school does not the doleful history lesson assume a more brilliant aspect when the adventures of Columbus are taken up? His interest is awakened, his imagination inspired, and he is delighted, all because again that chord in his nature has been struck--the love of adventure.

Perhaps no other single painting in the art galleries at the World's Fair of 1893 attracted the attention of a greater number of people, nor awakened in so many human breasts a feeling of such intense pathos as Thomas Hovenden's painting on "Breaking Home Ties." Here we have it once more, adventure--Jason setting off on his journey in search for the golden fleece of fame and fortune. The narrow path that so long has led him out into the silent acres--the fields that so many years have responded to his toil--he has forsaken. The dull routine has ceased to inspire, the home circle has become too narrow for his expanding soul. He has caught a glimpse of the glories of a new kingdom, and now he is going out to realize them.

The young man has always been the ruling element in every new departure. He has been the rock upon which the ages have been founded. In the words of another: "When the roll-call which men have written is read, it will be found that the young men have ruled the world. The oldest literatures have this record. The patriarchs unfolded the careers of boys into the conquest of old age. Kingdom and empire rode upon the shoulders of young men, and their voices of enthusiasm and hope have sounded through many a black-breasted midnight and trumpeted the dawn through skies of thickest darkness....