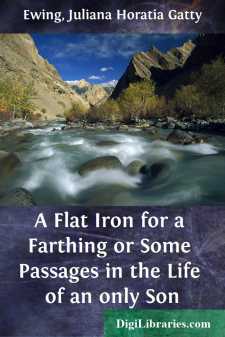 When the children clamour for a story, my wife says to me, "Tell them how you bought a flat iron for a farthing." Which I very gladly do; for three reasons. In the first place, it is about myself, and so I take an interest in it. Secondly, it is about some one very dear to me, as will appear hereafter. Thirdly, it is the only original story in my somewhat limited collection, and I am naturally rather proud of the favour with which it is invariably received. I think it was the foolish fancy of my dear wife and children combined that this most veracious history should be committed to paper. It was either because—being so unused to authorship—I had no notion of composition, and was troubled by a tyro tendency to stray from my subject; or because the part played by the flat iron, though important, was small; or because I and my affairs were most chiefly interesting to myself as writer, and my family as readers; or from a combination of all these reasons together, that my tale outgrew its first title and we had to add a second, and call it "Some Passages in the Life of an only Son."

Yes, I was an only son. I was an only child also, speaking as the world speaks, and not as Wordsworth's "simple child" spoke. But let me rather use the "little maid's" reckoning, and say that I have, rather than that I had, a sister. "Her grave is green, it may be seen." She peeped into the world, and we called her Alice; then she went away again and took my mother with her. It was my first great, bitter grief.

I remember well the day when I was led with much mysterious solemnity to see my new sister. She was then a week old.

"You must be quiet, sir," said Mrs. Bundle, a new member of our establishment, "and not on no account make no noise to disturb your dear, pretty mamma."

Repressed by this accumulation of negatives, as well as by the size and dignity of Mrs. Bundle's outward woman, I went a-tiptoe under her large shadow to see my new acquisition.

Very young children are not always pretty, but my sister was beautiful beyond the wont of babies. It is an old simile, but she was like a beautiful painting of a cherub. Her little face wore an expression seldom seen except on a few faces of those who have but lately come into this world, or those who are about to go from it. The hair that just gilded the pink head I was allowed to kiss was one shade paler than that which made a great aureole on the pillow about the pale face of my "dear, pretty" mother.

Years afterwards—in Belgium—I bought an old mediæval painting of a Madonna. That Madonna had a stiffness, a deadly pallor, a thinness of face incompatible with strict beauty. But on the thin lips there was a smile for which no word is lovely enough; and in the eyes was a pure and far-seeing look, hardly to be imagined except by one who painted (like Fra Angelico) upon his knees. The background (like that of many religious paintings of the date) was gilt. With such a look and such a smile my mother's face shone out of the mass of her golden hair the day she died....