A Farmer's Wife The Story of Ruth 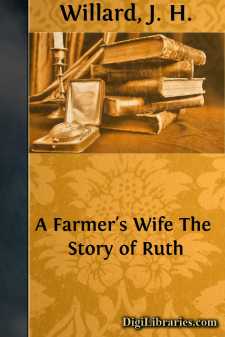 THE STORY OF RUTH.

IN the district called Ephrath, belonging to the tribe of Judah, stood the city of Bethlehem, or "house of bread." It was a city with walls and gates, and lay between fruitful hills and well-watered valleys. There among pleasant cornfields and pasture lands lived a man named Elimelech, which means "my God is my King." He was descended from one of the princes of Judah, and was a man of means and consequence.

A FERTILE REGION IN PALESTINE.

Elimelech's wife was named Naomi, meaning "pleasant," and they had two sons whose names were Mahlon and Chilion. This old and noble family lived in this fertile region, amid pleasant surroundings, and with happy prospects, until one of the frequent famines that were brought on by want of rain visited their district.

"THE PARCHED AND STERILE FIELDS."

Leaving the parched and sterile fields around Bethlehem, Elimelech, his family and his flocks, left their home and settled in the rich and well-watered lands of the Moabites, beyond the Jordan. As a wealthy foreigner, he probably was well received by the people of Moab, and secured good pasturage for his sheep and cattle.

SEEKING PASTURAGE FOR HIS SHEEP.

But much trouble was in store for this family, notwithstanding its wealth had enabled them to leave their own famine-stricken lands. First Elimelech died, and the family was without a head.

ON THE WAY TO THE LAND OF MOAB.

Then Mahlon married a beautiful woman of the country in which he was then living, named Ruth, and his brother Chilion married another named Orpah. Such marriages were against the law of Moses, because the Moabites worshipped idols, but as the nation was descended from Lot, the nephew of Abraham, the marriages were not so bad as they would have been with women belonging to other of the different tribes of Canaan.

PLAIN AND MOUNTAINS OF MOAB.From a Photograph.

After a while both of the sons of Naomi died, and she was left a childless widow in a strange land. By her gracious ways she had won the affection of both Ruth and Orpah, and now sorrow locked their hearts together in sympathy. At length, Naomi turned her longing eyes to her old home in Bethlehem. Ten years had come and gone since she left it, and now the news had reached her that there was plenty of food there.

Naomi and her two daughters-in-law started on their way to the land of Judah. After a while, thinking that they had accompanied her far enough, Naomi bade Ruth and Orpah return to their own mothers' homes, and spoke very kindly to them. She kissed them and would have taken leave of them, but they insisted that they would go with her to the home of her own people.

Then Naomi suggested that they would not be welcome at Bethlehem because they were Moabites. They would be looked upon with reproach, strangers in a strange land, and again she pleaded with them to go home, lest their love for her should prove a sorrow to them.

Orpah was persuaded to return and settle down among her kindred, and probably did so from a sense of duty; but Ruth would not leave Naomi, although her mother-in-law gave her one more opportunity to go back to Moab....