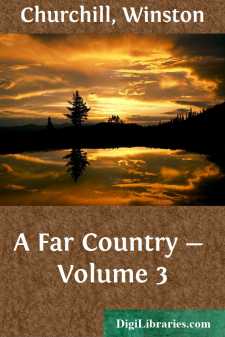 As the name of our city grew to be more and more a byword for sudden and fabulous wealth, not only were the Huns and the Slavs, the Czechs and the Greeks drawn to us, but it became the fashion for distinguished Englishmen and Frenchmen and sometimes Germans and Italians to pay us a visit when they made the grand tour of America. They had been told that they must not miss us; scarcely a week went by in our community—so it was said—in which a full-fledged millionaire was not turned out. Our visitors did not always remain a week,—since their rapid journeyings from the Atlantic to the Pacific, from Canada to the Gulf rarely occupied more than four,—but in the books embodying their mature comments on the manners, customs and crudities of American civilization no less than a chapter was usually devoted to us; and most of the adjectives in their various languages were exhausted in the attempt to prove how symptomatic we were of the ambitions and ideals of the Republic. The fact that many of these gentlemen—literary and otherwise—returned to their own shores better fed and with larger balances in the banks than when they departed is neither here nor there. Egyptians are proverbially created to be spoiled.

The wiser and more fortunate of these travellers and students of life brought letters to Mr. and Mrs. Hambleton Durrett. That household was symptomatic—if they liked—of the new order of things; and it was rare indeed when both members of it were at home to entertain them. If Mr. Durrett were in the city, and they did not happen to be Britons with sporting proclivities, they simply were not entertained: when Mrs. Durrett received them dinners were given in their honour on the Durrett gold plate, and they spent cosey and delightful hours conversing with her in the little salon overlooking the garden, to return to their hotels and jot down paragraphs on the superiority of the American women over the men. These particular foreigners did not lay eyes on Mr. Durrett, who was in Florida or in the East playing polo or engaged in some other pursuit. One result of the lavishness and luxury that amazed them they wrote—had been to raise the standard of culture of the women, who were our leisure class. But the travellers did not remain long enough to arrive at any conclusions of value on the effect of luxury and lavishness on the sacred institution of marriage.

If Mr. Nathaniel Durrett could have returned to his native city after fifteen years or so in the grave, not the least of the phenomena to startle him would have been that which was taking place in his own house. For he would have beheld serenely established in that former abode of Calvinism one of the most reprehensible of exotic abominations, a 'mariage de convenance;' nor could he have failed to observe, moreover, the complacency with which the descendants of his friends, the pew holders in Dr. Pound's church, regarded the matter: and not only these, but the city at large. The stronghold of Scotch Presbyterianism had become a London or a Paris, a Gomorrah!

Mrs. Hambleton Durrett went her way, and Mr. Durrett his. The less said about Mr. Durrett's way—even in this suddenly advanced age—the better. As for Nancy, she seemed to the distant eye to be walking through life in a stately and triumphant manner. I read in the newspapers of her doings, her comings and goings; sometimes she was away for months together, often abroad; and when she was at home I saw her, but infrequently, under conditions more or less formal. Not that she was formal,—or I: our intercourse seemed eloquent of an intimacy in a tantalizing state of suspense. Would that intimacy ever be renewed? This was a question on which I sometimes speculated. The situation that had suspended or put an end to it, as the case might be, was never referred to by either of us.

One afternoon in the late winter of the year following that in which we had given a dinner to the Scherers (where the Durretts had rather marvellously appeared together) I left my office about three o'clock—a most unusual occurrence. I was restless, unable to fix my mind on my work, filled with unsatisfied yearnings the object of which I sought to keep vague, and yet I directed my steps westward along Boyne Street until I came to the Art Museum, where a loan exhibition was being held....