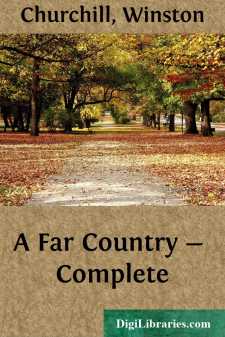 My name is Hugh Paret. I was a corporation lawyer, but by no means a typical one, the choice of my profession being merely incidental, and due, as will be seen, to the accident of environment. The book I am about to write might aptly be called The Autobiography of a Romanticist. In that sense, if in no other, I have been a typical American, regarding my country as the happy hunting-ground of enlightened self-interest, as a function of my desires. Whether or not I have completely got rid of this romantic virus I must leave to those the aim of whose existence is to eradicate it from our literature and our life. A somewhat Augean task!

I have been impelled therefore to make an attempt at setting forth, with what frankness and sincerity I may, with those powers of selection of which I am capable, the life I have lived in this modern America; the passions I have known, the evils I have done. I endeavour to write a biography of the inner life; but in order to do this I shall have to relate those causal experiences of the outer existence that take place in the world of space and time, in the four walls of the home, in the school and university, in the noisy streets, in the realm of business and politics. I shall try to set down, impartially, the motives that have impelled my actions, to reveal in some degree the amazing mixture of good and evil which has made me what I am to-day: to avoid the tricks of memory and resist the inherent desire to present myself other and better than I am. Your American romanticist is a sentimental spoiled child who believes in miracles, whose needs are mostly baubles, whose desires are dreams. Expediency is his motto. Innocent of a knowledge of the principles of the universe, he lives in a state of ceaseless activity, admitting no limitations, impatient of all restrictions. What he wants, he wants very badly indeed. This wanting things was the corner-stone of my character, and I believe that the science of the future will bear me out when I say that it might have been differently built upon. Certain it is that the system of education in vogue in the 70's and 80's never contemplated the search for natural corner-stones.

At all events, when I look back upon the boy I was, I see the beginnings of a real person who fades little by little as manhood arrives and advances, until suddenly I am aware that a stranger has taken his place....

I lived in a city which is now some twelve hours distant from the Atlantic seaboard. A very different city, too, it was in youth, in my grandfather's day and my father's, even in my own boyhood, from what it has since become in this most material of ages.

There is a book of my photographs, preserved by my mother, which I have been looking over lately. First is presented a plump child of two, gazing in smiling trustfulness upon a world of sunshine; later on a lean boy in plaided kilts, whose wavy, chestnut-brown hair has been most carefully parted on the side by Norah, his nurse. The face is still childish. Then appears a youth of fourteen or thereabout in long trousers and the queerest of short jackets, standing beside a marble table against a classic background; he is smiling still in undiminished hope and trust, despite increasing vexations and crossings, meaningless lessons which had to be learned, disciplines to rack an aspiring soul, and long, uncomfortable hours in the stiff pew of the First Presbyterian Church. Associated with this torture is a peculiar Sunday smell and the faint rustling of silk dresses. I can see the stern black figure of Dr. Pound, who made interminable statements to the Lord.

These pictures, though yellowed and faded, suggest vividly the being I once was, the feelings that possessed and animated me, love for my playmates, vague impulses struggling for expression in a world forever thwarting them....