A Essay Towards a New Theory of Vision 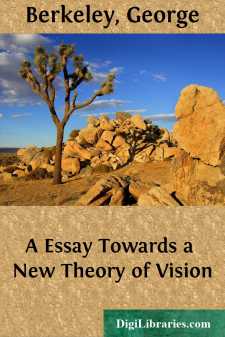 1. My design is to show the manner wherein we perceive by sight the distance, magnitude, and situation of OBJECTS. Also to consider the difference there is betwixt the IDEAS of sight and touch, and whether there be any IDEA common to both senses.

2. It is, I think, agreed by all that DISTANCE, of itself and immediately, cannot be seen. For DISTANCE being a Line directed end-wise to the eye, it projects only one point in the fund of the eye, which point remains invariably the same, whether the distance be longer or shorter.

3. I find it also acknowledged that the estimate we make of the distance of OBJECTS considerably remote is rather an act of judgment grounded on EXPERIENCE than of SENSE. For example, when I perceive a great number of intermediate OBJECTS, such as houses, fields, rivers, and the like, which I have experienced to take up a considerable space, I thence form a judgment or conclusion that the OBJECT I see beyond them is at a great distance. Again, when an OBJECT appears faint and small, which at a near distance I have experienced to make a vigorous and large appearance, I instantly conclude it to be far off: And this, it is evident, is the result of EXPERIENCE; without which, from the faintness and littleness I should not have inferred anything concerning the distance of OBJECTS.

4. But when an OBJECT is placed at so near a distance as that the interval between the eyes bears any sensible proportion to it, the opinion of speculative men is that the two OPTIC AXES (the fancy that we see only with one eye at once being exploded) concurring at the OBJECT do there make an ANGLE, by means of which, according as it is greater or lesser, the OBJECT is perceived to be nearer or farther off.

5. Betwixt which and the foregoing manner of estimating distance there is this remarkable difference: that whereas there was no apparent, necessary connection between small distance and a large and strong appearance, or between great distance and a little and faint appearance, there appears a very necessary connection between an obtuse angle and near distance, and an acute angle and farther distance. It does not in the least depend upon experience, but may be evidently known by anyone before he had experienced it, that the nearer the concurrence of the OPTIC AXES, the greater the ANGLE, and the remoter their concurrence is, the lesser will be the ANGLE comprehended by them.

6. There is another way mentioned by optic writers, whereby they will have us judge of those distances, in respect of which the breadth of the PUPIL hath any sensible bigness: And that is the greater or lesser divergency of the rays, which issuing from the visible point do fall on the PUPIL, that point being judged nearest which is seen by most diverging rays, and that remoter which is seen by less diverging rays: and so on, the apparent distance still increasing, as the divergency of the rays decreases, till at length it becomes infinite, when the rays that fall on the PUPIL are to sense parallel. And after this manner it is said we perceive distance when we look only with one eye.

7. In this case also it is plain we are not beholding to experience: it being a certain, necessary truth that the nearer the direct rays falling on the eye approach to a PARALLELISM, the farther off is the point of their intersection, or the visible point from whence they flow....