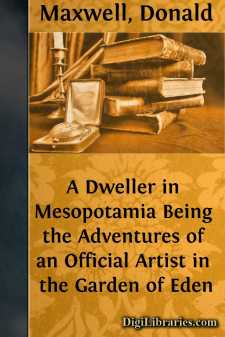 I THE FIERY FURNACE Abadan.

There is an unenviable competition between places situated in the region of Mesopotamia and the Persian Gulf as to which can be the hottest. Abadan, the ever-growing oil port, which is in Persia and on the starboard hand as you go up the Shatt-el-Arab, if not actually the winner according to statistics, comes out top in popular estimation. Its proximity to the scorching desert, its choking dustiness and its depressing isolation, are characteristics which it shares with countless other places among these mud plains. But it can outdo them all with its bleached and slime-stained ground in which nothing can grow, its roaring furnaces and its all-pervading smell of hot oil.

Across the broad waters of the Shatt-el-Arab there stretches a lonely strip of country bounded by a wall of palm-tops. Like all the land here it is cultivated as long as it borders the river and thickly planted with date groves. Then lies a nondescript belt that just divides the desert from the sown, and then, a mile or so inland, scorched and unprofitable wilderness.

Into this monotonous spiked sky-line the sun was wont to cut his fiery way without much variety of effect every evening, and night rushed down, bringing respite from this heat; for it is happily one of the compensations of life in these parts that the nights are cool, however hot the day.

About 150 miles from this busy spot lie the oilfields of the Anglo-Persian Oil Company. Two adventurous iron pipes start courageously with crude oil and conduct it by or through or over every obstacle from these wells to Abadan. In the early days of the war great and successful efforts were made to protect this line of supply, which was of vital importance to the British Navy. The Turks lost Fao, the fort that commanded the entrance to the Shatt-el-Arab, within a few days of the opening of hostilities. They had imagined it such a formidable obstacle to our approach that they were thrown suddenly on their beam ends when we took it. Consequently they could not keep us out of Abadan, but fell back on Beit Naama vainly attempting to block the river by sinking ships. One of the hulks, however, swung round and left a channel through which a passage was simple. I once sketched some of these old ships as they lay throughout the period of hostilities. Since then they have been partially blown up. A divers' boat was at work when I made my drawing and the first charge was fired about three minutes after I had finished, removing the funnel and one mast of the principal derelict.

Well, to begin my story.

It was evening. The sun was setting in the orthodox manner described above. Abadan was looking very much as usual. The smoke was smoking, the pumps were pumping, the works were working, and all the oilers along the quay, like all well-behaved oilers, were oiling.

As if to protest against the frankly commercial atmosphere of everything and everybody at Abadan, a dhow that might have belonged to Sinbad the Sailor himself was making slow headway before the failing breeze under a huge spread of bellying canvas—an apparition from another age, relieved boldly against the dark hull of a tank steamer....