A Dutch Boy Fifty Years After 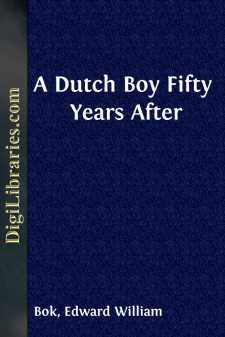 In recent years American literature has been enriched by certain autobiographies of men and women who had been born abroad, but who had been brought to this country, where they grew up as loyal citizens of our great nation. Such assimilated Americans had to face not only the usual conditions confronting a stranger in a strange land, but had to develop within themselves the noble conception of Americanism that was later to become for them a flaming gospel. Andrew Carnegie, the canny Scotch lad who began as a cotton weaver's assistant, became a steel magnate and an eminent constructive philanthropist. Jacob Riis, the ambitious Dane, told in The Making of an American the story of his rise to prominence as a social and civic worker in New York. Mary Antin, who was brought from a Russian ghetto at the age of thirteen, gave us in The Promised Land a most impressive interpretation of America's significance to the foreign-born. The very title of her book was a flash of inspiration.

To this group of notable autobiographies belongs The Americanization of Edward Bok, which received, from Columbia University, the Joseph Pulitzer Prize of one thousand dollars as "the best American biography teaching patriotic and unselfish service to the Nation and at the same time illustrating an eminent example." The judges who framed that decision could not have stated more aptly the scope and value of the book. It is the story of an unusual education, a conspicuous achievement, and an ideal now in course of realization.

At the age of six Edward Bok was brought to America by his parents, who had met with financial reverses in their native country of the Netherlands. He spent six years in the public schools of Brooklyn, but even while getting the rudiments of a formal education he had to work during his spare hours to bring home a few more dollars to aid his needy family. His first job was cleaning the show-window of a small bakery for fifty cents a week. At twelve he became an office boy in the Western Union Telegraph Company; at nineteen he was a stenographer; at twenty-six he became editor of The Ladies' Home Journal, which during the thirty years of his supervision achieved the remarkable circulation of two million copies and reached every month an audience of perhaps ten million persons. Such is the bare outline of a career that has the essential characteristics of struggle and achievement, of intimate contact with eminent men and women, and, most interesting of all, is not a fulfilled career, but a life still in the making.

The significance of The Americanization of Edward Bok is threefold and is clearly indicated by the author's own conception of the three periods that should constitute a well-rounded life.. These he characterizes as education, achievement, and service for others. Conceived in this ideal spirit, the autobiography has a message for every American schoolboy or schoolgirl who is looking forward to the years of achievement and who should be made to understand that there is a finer duty beyond....