A Drift from Redwood Park 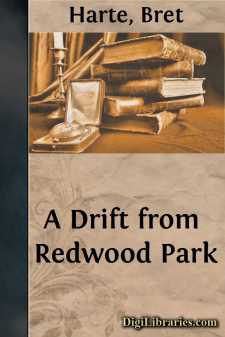 They had all known him as a shiftless, worthless creature. From the time he first entered Redwood Camp, carrying his entire effects in a red handkerchief on the end of a long-handled shovel, until he lazily drifted out of it on a plank in the terrible inundation of '56, they never expected anything better of him. In a community of strong men with sullen virtues and charmingly fascinating vices, he was tolerated as possessing neither—not even rising by any dominant human weakness or ludicrous quality to the importance of a butt. In the dramatis personae of Redwood Camp he was a simple "super"—who had only passive, speechless roles in those fierce dramas that were sometimes unrolled beneath its green-curtained pines. Nameless and penniless, he was overlooked by the census and ignored by the tax collector, while in a hotly-contested election for sheriff, when even the head-boards of the scant cemetery were consulted to fill the poll-lists, it was discovered that neither candidate had thought fit to avail himself of his actual vote. He was debarred the rude heraldry of a nickname of achievement, and in a camp made up of "Euchre Bills," "Poker Dicks," "Profane Pete," and "Snap-shot Harry," was known vaguely as "him," "Skeesicks," or "that coot." It was remembered long after, with a feeling of superstition, that he had never even met with the dignity of an accident, nor received the fleeting honor of a chance shot meant for somebody else in any of the liberal and broadly comprehensive encounters which distinguished the camp. And the inundation that finally carried him out of it was partly anticipated by his passive incompetency, for while the others escaped—or were drowned in escaping—he calmly floated off on his plank without an opposing effort.

For all that, Elijah Martin—which was his real name—was far from being unamiable or repellent. That he was cowardly, untruthful, selfish, and lazy, was undoubtedly the fact; perhaps it was his peculiar misfortune that, just then, courage, frankness, generosity, and activity were the dominant factors in the life of Redwood Camp. His submissive gentleness, his unquestioned modesty, his half refinement, and his amiable exterior consequently availed him nothing against the fact that he was missed during a raid of the Digger Indians, and lied to account for it; or that he lost his right to a gold discovery by failing to make it good against a bully, and selfishly kept this discovery from the knowledge of the camp. Yet this weakness awakened no animosity in his companions, and it is probable that the indifference of the camp to his fate in this final catastrophe came purely from a simple forgetfulness of one who at that supreme moment was weakly incapable.

Such was the reputation and such the antecedents of the man who, on the 15th of March, 1856, found himself adrift in a swollen tributary of the Minyo. A spring freshet of unusual volume had flooded the adjacent river until, bursting its bounds, it escaped through the narrow, wedge-shaped valley that held Redwood Camp. For a day and night the surcharged river poured half its waters through the straggling camp. At the end of that time every vestige of the little settlement was swept away; all that was left was scattered far and wide in the country, caught in the hanging branches of water-side willows and alders, embayed in sluggish pools, dragged over submerged meadows, and one fragment—bearing up Elijah Martin—pursuing the devious courses of an unknown tributary fifty miles away. Had he been a rash, impatient man, he would have been speedily drowned in some earlier desperate attempt to reach the shore; had he been an ordinary bold man, he would have succeeded in transferring himself to the branches of some obstructing tree; but he was neither, and he clung to his broken raft-like berth with an endurance that was half the paralysis of terror and half the patience of habitual misfortune. Eventually he was caught in a side current, swept to the bank, and cast ashore on an unexplored wilderness.

His first consciousness was one of hunger that usurped any sentiment of gratitude for his escape from drowning. As soon as his cramped limbs permitted, he crawled out of the bushes in search of food. He did not know where he was; there was no sign of habitation—or even occupation—anywhere. He had been too terrified to notice the direction in which he had drifted—even if he had possessed the ordinary knowledge of a backwoodsman, which he did not. He was helpless. In his bewildered state, seeing a squirrel cracking a nut on the branch of a hollow tree near him, he made a half-frenzied dart at the frightened animal, which ran away. But the same association of ideas in his torpid and confused brain impelled him to search for the squirrel's hoard in the hollow of the tree....