A Doctor of the Old School - Volume 5 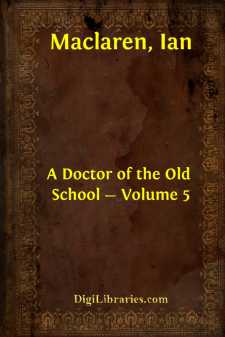 It is with great good will that I write this short preface to the edition of "A Doctor of the Old School" (which has been illustrated by Mr. Gordon after an admirable and understanding fashion) because there are two things that I should like to say to my readers, being also my friends.

One, is to answer a question that has been often and fairly asked. Was there ever any doctor so self-forgetful and so utterly Christian as William MacLure? To which I am proud to reply, on my conscience: Not one man, but many in Scotland and in the South country. I will dare prophecy also across the sea.

It has been one man's good fortune to know four country doctors, not one of whom was without his faults—Weelum was not perfect—but who, each one, might have sat for my hero. Three are now resting from their labors, and the fourth, if he ever should see these lines, would never identify himself.

Then I desire to thank my readers, and chiefly the medical profession for the reception given to the Doctor of Drumtochty.

For many years I have desired to pay some tribute to a class whose service to the community was known to every countryman, but after the tale had gone forth my heart failed. For it might have been despised for the little grace of letters in the style and because of the outward roughness of the man. But neither his biographer nor his circumstances have been able to obscure MacLure who has himself won all honest hearts, and received afresh the recognition of his more distinguished brethren. From all parts of the English-speaking world letters have come in commendation of Weelum MacLure, and many were from doctors who had received new courage. It is surely more honor than a new writer could ever have deserved to receive the approbation of a profession whose charity puts us all to shame.

May I take this first opportunity to declare how deeply my heart has been touched by the favor shown to a simple book by the American people, and to express my hope that one day it may be given me to see you face to face.

THE MOURNING OF THE GLEN

Dr. MacLure was buried during the great snowstorm which is still spoken of, and will remain the standard of snowfall in Drumtochty for the century. The snow was deep on the Monday, and the men that gave notice of his funeral had hard work to reach the doctor's distant patients. On Tuesday morning it began to fall again in heavy, fleecy flakes, and continued till Thursday, and then on Thursday the north wind rose and swept the snow into the hollows of the roads that went to the upland farms, and built it into a huge bank at the mouth of Glen Urtach, and laid it across our main roads in drifts of every size and the most lovely shapes, and filled up crevices in the hills to the depth of fifty feet.

On Friday morning the wind had sunk to passing gusts that powdered your coat with white, and the sun was shining on one of those winter landscapes no townsman can imagine and no countryman ever forgets....