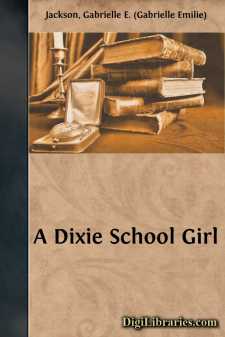 Four straight country roads running at right angles. You cannot see where they begin because they have their beginning “over the hills and far away,” but you can see where they end at “Four Corners,” the hub of that universe, for there stand the general store, which is also the postoffice, the “tavern,” as it is called in that part of the world, the church, the rectory, and perhaps a dozen private dwellings.

“Four Corners” is oddly mis-named, because there are no corners there at all. It is a circle. Maybe it was originally four corners, but today it is certainly a circle with a big open space in the center, and in the very middle of that stands a flag staff upon which floats the stars and stripes. The whole open space is covered with the softest green turf. Not a lawn, mind you, such as one may see in almost any immaculately kept northern town, with artistic flower beds dotting it, and a carefully trimmed border of foliage plants surrounding it. No, this circle has real Virginia turf; the thick, rich, indestructible turf one finds in England, which, as an old gardener told the writer, “we rolls and tills it for a thousand years.” Nature had been rolling and tilling this green plot of ground for a good many thousand years.

The circle was encompassed by an iron rail fence to which the people from the surrounding community hitched their saddle or carriage horses when they came to the “Store” for their mail, or to make various purchases. And there the beasties often stood for hours, rubbing noses and exchanging the gossip of the paddocks, horse (or mule) fashion.

There were always several hitched there, and they were always gossiping or dozing as they waited for their owners to start toward home, and they represented all sorts and conditions of their kind just as those owners represented all sorts and conditions of men. Some were young men, some middle-aged, some old. Some were of the gentry of the surrounding country, some the humbler white folk, some the negroes who had managed to acquire small tracts of land which they farmed successfully or otherwise. Among them, too, was the typical shiftless, “triflin’ no-’count” darkey who “jist sits ’round a-waitin’,” though it would be hard for him to tell what he was waiting for.

Nevertheless, the “Corners” is the center of the activities of that community, though to make those who most frequently gather there, comprehend the limitations of its activities they would have to be set down in the midst of some big, hustling city.

Still, some who go to the Corners are very much alive to this fact, for they have journeyed throughout the length and breadth of their own land and many other lands beside. But they do not tell their less travelled brothers much of the wonders which lie beyond the towering mountains, which is just as well, perhaps. The stay-at-home might be less happy and content were they to learn of the doings of the big world beyond the barriers of their snug, peaceful valley, which seems to the wiser ones so far away from the trials, struggles, and worries of the world beyond....