by A. (Alvan) McAllister 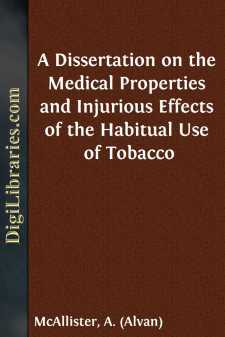 The first edition of Dr. McAllister's Essay, was printed without any Appendix. Having myself been in the habit of using tobacco very moderately (usually but once in a day) from early life, I read the Essay as first printed with great interest. It appeared to me a sober, judicious, rational appeal to the understanding and judgment of the public, with respect to the subject of which it treats. A highly respected friend of mine desired me to give him my opinion of the Essay in writing. I consented to do this; and when I had done it, he judged it expedient to publish that opinion; to which I gave my consent. It was published in the Journal of Humanity; and for substance it was made up of an abridgement of Dr. McAllister's views, and some strictures on his style and method of treating the subject. In particular, a desire was expressed that Dr. McA. would discuss more fully some of the arguments employed in defence of using tobacco. This critique was sent to the author of the Essay; who in consequence of it expressed a willingness to revise his work, and make such additions as had been suggested. Some weeks since he transmitted to me a copy of the original edition, with a manuscript containing the Appendix to the present edition. At the same time he requested me to make any alterations in either part, which I might deem expedient. I have used this liberty so far as to change a few technical words for popular and intelligible ones. In some of these cases, I have detracted from the specific accuracy of the writer, as a medical man, for the sake of making his expressions more intelligible to the mass of readers. What he will thus lose, in his reputation for scientifical accuracy, he will gain by becoming more useful. A few other slight alterations and modifications have been made; but only such as I judged the worthy author would at once cheerfully admit. I have kept within the bounds of the liberty which he gave me; and I trust he will not be dissatisfied with what I have done.

I command the serious perusal of the following Essay and Appendix to every man, who wishes to become well informed respecting the properties of tobacco. Whoever uses this substance as a luxury, is bound by a due regard to his own physical welfare to make himself acquainted with its properties and their influence. If any man can soberly peruse the following pages, without conviction that he is "playing with edge-tools," while he is indulging in the use of tobacco, I must confess his mind to be of a composition different from mine.

One word as to breaking off the habit. The difficulty, I fully believe, is not much less than the breaking off from ardent spirits. But as to any danger to health in breaking off, the fear is idle; excepting in case of delicate habits, where small changes produce great effects; or in case of advanced years and inveterate habit, where the course of those fluids which are so much affected by tobacco, if suddenly and entirely changed, may give rise to serious inconvenience. My belief, however, is, that there no case in which a judicious and proper course may not effect an entire weaning from the use of tobacco. Most persons in good health, and all in younger life, may break off at once, without the least danger. Two or three days will overcome all difficulty. Those whom slight changes in regimen affect very much, may break off more gradually; and so of persons advanced in life. A good way of accomplishing this, is to procure some of the most detestable tobacco which can be found, and when appetite will not forego the use of it without an evil greater than to use it, then take it in such a quantity as will be sure to nauseate and prostrate. This will put the next dose farther off; and two or three doses thus administered, will so blunt the appetite, that quitting the practice will appear to be quite a moderate degree of self-denial. Those who never felt the appetite may laugh at such directions as these; but those who know its power, will at least think them worth some consideration.

I do not place the use of tobacco in the same scale with that of ardent spirits. It does not make men maniacs and demons. But that it does undermine the health of thousands; that it creates a nervous irritability, and thus operates on the temper and moral character of men; that it often creates a thirst for spirituous liquors; that it allures to clubs, and grog-shops, and taverns, and thus helps to make idlers and spendthrifts; and finally, that it is a very serious and needless expense; are things which cannot be denied by any observing and considerate person. And if all this be true, how can the habitual use of tobacco, as a mere luxury, be defended by anyone who wishes well to his fellow-men, or has a proper regard to his own usefulness?

I have been in the use of it for thirty-five years; but I confess myself unable, on any ground, to defend or to excuse the practice. The wants which are altogether artificial, are such as duty calls us to avoid. The indulgence of them can in no way promote our good or our real comfort.

I commend, therefore, the following sheets to the public: hoping that all, and especially the young, will read and well consider the suggestions they offer.

To the Medical Society of the County of Oneida.

We have accidentally seen the manuscript copy of an address pronounced lately before your society, by Dr. McAllister. The research on which it is founded, and its perspicuity and arrangement, entitle it to a form more permanent than manuscript. But if the results are true, which it attempts to substantiate, they present imperious considerations for the publication of the address.

We are not disposed to contract the circle of enjoyment; but if mischief crouches under the covert of any pleasure, propriety requires a notification to the unwary....