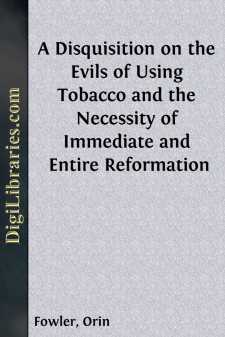 Among the evils which a vitiated appetite has fastened upon mankind, those that arise from the use of Tobacco hold a prominent place, and call loudly for reform. We pity the poor Chinese, who stupifies body and mind with opium, and the wretched Hindoo, who is under a similar slavery to his favorite plant, the Betel; but we present the humiliating spectacle of an enlightened and christian nation, wasting annually more than twenty-five millions of dollars, and destroying the health and the lives of thousands, by a practice not at all less degrading than that of the Chinese or Hindoo.

Whether, then, we consider the folly and indecency of the habit, or the waste of property, health and life which it occasions, it is time for the Patriot, the Philanthropist and the Christian, to put forth united, vigorous and systematic efforts to banish this injurious and disgusting habit from the community.

It is a fact, that one reform not only prepares the way for another, but often so depends upon it, that the complete triumph of the one cannot be effected without that of the other. Such appears to be the relationship existing between the use of intoxicating drinks and that of the stimulating narcotic, tobacco. The use of tobacco almost always accompanies the use of alcoholic drinks, and it may be feared that total abstinence from the latter will not be permanent, unless there is also a total abstinence from the former. Our temperance brethren, particularly our worthy Washingtonians, will do well to bear this in mind.

The tobacco reform, being similar to that of temperance, must be brought about by similar means. Information must be diffused, the evils of the practice exposed, and the attention of the public aroused to the subject. To aid in this, is the object of the following pamphlet, two editions of which have already been put in circulation, and it is said to have been re-published in England. The favorable reception of the former editions, as shown by the repeated editorial remarks, and the numerous letters of thanks addressed to the author, affords much encouragement for a vigorous prosecution of the enterprise. Three members of the church of which the author is pastor, placed at his disposal a sum sufficient to supply, gratuitously, each of the 1000 Beneficiaries of the American Education Society, with a copy of the essay. Orders were furnished for bundles for distribution. An individual in Maine ordered 500 copies, and 1000 were ordered by E. C. Delevan, of New York, the distinguished advocate of Temperance.

Let the friends of true reform remember the early days of the temperance cause, and take courage. All interested should exert themselves. Clergymen can do much by lecturing and other means. Churches should form Anti-Tobacco Societies, circulate information and induce as many as possible to take a stand against the evil, by enrolling their names on a Pledge.

Teachers should speak on the subject, and endeavor to prevent the formation of so vile and tyranical a habit, by those under their influence; for it is a fact that lads in many of our public schools try to hasten their claims to manliness, by learning to chew, smoke or snuff. This being the case, we may expect, of course, to find these practices prevalent in our academies and colleges, our medical and our law schools and theological seminaries.

In the early records of Harvard University, says Dr. Mussey, is a regulation ordering that "no scholar shall take tobacco unless permitted by the President, with the consent of his parents, on good reason first given by a physician, and then only in a sober and private manner." How different now!...