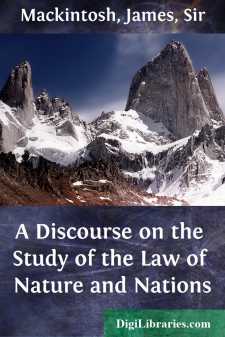 Before I begin a course of lectures on a science of great extent and importance, I think it my duty to lay before the public the reasons which have induced me to undertake such a labour, as well as a short account of the nature and objects of the course which I propose to deliver. I have always been unwilling to waste in unprofitable inactivity that leisure which the first years of my profession usually allow, and which diligent men, even with moderate talents, might often employ in a manner neither discreditable to themselves, nor wholly useless to others. Desirous that my own leisure should not be consumed in sloth, I anxiously looked about for some way of filling it up, which might enable me, according to the measure of my humble abilities, to contribute somewhat to the stock of general usefulness. I had long been convinced that public lectures, which have been used in most ages and countries to teach the elements of almost every part of learning, were the most convenient mode in which these elements could be taught; that they were the best adapted for the important purposes of awakening the attention of the student, of abridging his labours, of guiding his inquiries, of relieving the tediousness of private study, and of impressing on his recollection the principles of science. I saw no reason why the Law of England should be less adapted to this mode of instruction, or less likely to benefit by it, than any other part of knowledge. A learned gentleman, however, had already occupied that ground,and will, I doubt not, persevere in the useful labour which he has undertaken. On his province it was far from my wish to intrude. It appeared to me that a course of lectures on another science closely connected with all liberal professional studies, and which had long been the subject of my own reading and reflection, might not only prove a most useful introduction to the law of England, but might also become an interesting part of general study, and an important branch of the education of those who were not destined for the profession of the law. I was confirmed in my opinion by the assent and approbation of men, whose names, if it were becoming to mention them on so slight an occasion, would add authority to truth, and furnish some excuse even for error. Encouraged by their approbation, I resolved without delay to commence the undertaking, of which I shall now proceed to give some account; without interrupting the progress of my discourse by anticipating or answering the remarks of those who may, perhaps, sneer at me for a departure from the usual course of my profession; because I am desirous of employing in a rational and useful pursuit that leisure, of which the same men would have required no account, if it had been wasted on trifles, or even abused in dissipation.

The science which teaches the rights and duties of men and of states, has, in modern times, been called the Law of Nature and Nations. Under this comprehensive title are included the rules of morality, as they prescribe the conduct of private men towards each other in all the various relations of human life; as they regulate both the obedience of citizens to the laws, and the authority of the magistrate in framing laws and administering government; as they modify the intercourse of independent commonwealths in peace, and prescribe limits to their hostility in war. This important science comprehends only that part of private ethics which is capable of being reduced to fixed and general rules. It considers only those general principles of jurisprudence and politics which the wisdom of the lawgiver adapts to the peculiar situation of his own country, and which the skill of the statesman applies to the more fluctuating and infinitely varying circumstances which affect its immediate welfare and safety. "For there are in nature certain fountains of justice whence all civil laws are derived, but as streams; and like as waters do take tinctures and tastes from the soils through which they run, so do civil laws vary according to the regions and governments where they are planted, though they proceed from the same fountains."—Bacon's Dig. and Adv. of Learn. Works, vol. i. p. 101.

On the great questions of morality, of politics, and of municipal law, it is the object of this science to deliver only those fundamental truths of which the particular application is as extensive as the whole private and public conduct of men; to discover those "fountains of justice," without pursuing the "streams" through the endless variety of their course. But another part of the subject is treated with greater fulness and minuteness of application; namely, that important branch of it which professes to regulate the relations and intercourse of states, and more especially, both on account of their greater perfection and their more immediate reference to use, the regulations of that intercourse as they are modified by the usages of the civilised nations of Christendom. Here this science no longer rests in general principles. That province of it which we now call the law of nations, has, in many of its parts, acquired among our European nations much of the precision and certainty of positive law, and the particulars of that law are chiefly to be found in the works of those writers who have treated the science of which I now speak. It is because they have classed (in a manner which seems peculiar to modern times) the duties of individuals with those of nations, and established their obligation on similar grounds, that the whole science has been called, "The Law of Nature and Nations."

Whether this appellation be the happiest that could have been chosen for the science, and by what steps it came to be adopted among our modern moralists and lawyers, are inquiries, perhaps, of more curiosity than use, and which, if they deserve any where to be deeply pursued, will be pursued with more propriety in a full examination of the subject than within the short limits of an introductory discourse....