A Discourse Concerning Ridicule and Irony in Writing (1729)

by Edward A. (Edward Alan) Bloom 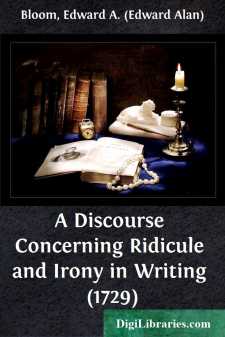 Between 1710 and 1729 Anthony Collins was lampooned, satirized, and gravely denounced from pulpit and press as England’s most insidious defiler of church and state. Yet within a year of his death he became the model of a proper country gentleman,

... he had an opulent Fortune, descended to him from his Ancestors, which he left behind him unimpair’d: He lived on his own Estate in the Country, where his Tenants paid him moderate Rents, which he never enhanced on their making any Improvements; he always oblig’d his Family to a constant attendance on Publick Worship; as he was himself a Man of the strictest Morality, for he never suffer’d any Body about him who was deficient in that Point; he exercised a universal Charity to all Sorts of People, without any Regard either to Sect or Party; being in the Commission of the Peace, he administered Justice with such Impartiality and Incorruptness, that the most distant Part of the County flock’d to his Decisions; but the chief Use he made of his Authority was in accommodating Differences;...

In a comparison which likens him to Sir Roger de Coverley, there is less truth than fiction. What they did share was a love of the countryside and a “universal Charity” towards its inhabitants. For the most part, however, we can approximate Collins’s personality by reversing many of Sir Roger’s traits. Often at war with his world, as the spectatorial character was not, he managed to maintain an intellectual rapport with it and even with those who sought his humiliation. He never—as an instance—disguised his philosophical distrust of Samuel Clarke; yet during any debate he planned “most certainly [to] outdo him in civility and good manners.” This decorum in no way compromised his pursuit of what he considered objective truth or his denunciation of all “methods” or impositions of spiritual tyranny. Thus, during the virulent, uneven battle which followed upon the publication of the Discourse of Free-Thinking, he ignored his own wounds in order to applaud a critic’s

suspicions that there is a sophism in what he calls my hypothesis. That is a temper that ought to go thro’ all our Inquirys, and especially before we have an opportunity of examining things to the bottom. It is safest at all times, and we are least likely to be mistaken, if we constantly suspect our selves to be under mistakes.... I have no system to defend or that I would seem to defend, and am unconcerned for the consequence that may be drawn from my opinion; and therefore stand clear of all difficultys wch others either by their opinion or caution are involved in.

This is the statement of a man whose intellectual and religious commitment makes him see that his own fallibility is symptomatic of a human tendency to error. For himself, hence, he tries to avoid all manner of hard-voiced enthusiasm. Paradoxically, however, Collins searched with a zealot’s avidity for any controversy which would either assert his faith or test his disbelief....