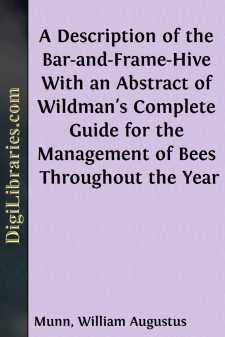 Having been frequently requested to explain the use of the bar-and-frame-hive, in the management of bees, I have been induced to print the following pamphlet, to point out the advantages this new hive possesses over the common ones.

I have added extracts from various authorities to show the importance of transporting bees for a change of pasturage, and thus prolonging the honey harvest. Regarding the natural history of the bee, I have merely stated a few of the leading facts connected with that interesting subject, drawn from Wildman's Book on Bee-management.

A B C D, the top lid of the oblong box; G H, the half of it made to fall back, and supported at an angle by the hinges, h h; l, the upper part of the lock of the box; i k, the two gable ends of the roof; i, the perforated zinc shown as secured in a triangular frame; and k, the outside appearance of the ventilator.

Q Q, the two quadrants, supporting the table, I J, which is formed by the side of the box, A C E E, being let down; a a a, &c., fifteen holes made to receive the back bolt, m, of the observation-frame, Z; b b, two bolts to fasten into the holes, c and d, when the table I J, is closed, f, being the other part of the lock.

T, one of the handles of the box (the other not seen).

U, one of the blocks (the other not shown) to keep the bottom of the box from the ground, when the four legs L L L L, are unscrewed from the four corners of the box.

X X B D, the front of the box; e, the alighting board, four inches wide, extending the whole length from F to F; X 2, shows a small ledge to keep the wet from entering the bee-box, and X I, one of the slides s, drawn out, and extending beyond the end of the box; the other half slide, s, on the left hand side, not drawn out in the sketch, the part under X 1, shows the opening for the ingress and egress of the bees.

R, one of the two pieces of red cedar at the inside of the box, fixed at the ends, E F. E F. The Q Q, quadrants being made to work between the red cedar and the outer case or box; v v, the fillet fixed in the length of the box, on a level with the tops of red cedar; c d, the holes for the bolts b b, in the table I J.

W W, pieces of perforated zinc laid upon the tops of the bee-frames resting on the fillets, v v.