A Description of Modern Birmingham Whereunto Are Annexed Observations Made during an Excursion Round the Town, in the Summer of 1818, Including Warwick and Leamington 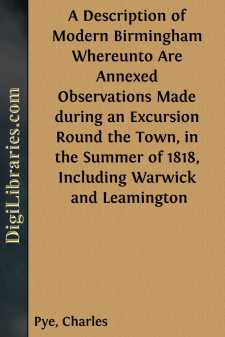 The author's avowed object, is to arrange the ancient and modern names, in a clear and methodical manner, so as to give a ready reference to each; and in addition to this arrangement of ancient appellations both of people and places, with the modern names, he has given a concise chronological history of the principal places; by which the book also serves in many cases as a gazetteer. We find upon the whole a clear and practical arrangement of articles which are dispersed in more voluminous works. Mr. Pye has condensed within a narrow space the substance of Cellarius, Lempriere, Macbean, etc. In short the work will be found very useful and convenient to all persons reading the classics or studying modern geography, and to all readers of history, sacred or profane.

This may be recommended as a very convenient, useful, and relatively cheap publication of the kind, and may very properly be recommended for schools. The author very modestly desires that such errors and omissions as will unavoidably appear in an attempt of this nature may be pointed out to him, for the benefit of a future edition.

We prefer the old mode of having separate divisions; the one including ancient and the other modern geography, to that of uniting both under the same alphabetical arrangement. When the title of this work is considered, it is somewhat incongruous that the account of places should be inserted under the modern names, and a mere reference under that of the ancient. These accounts appear to be in general correct, but they are in our judgment too brief to be satisfactory. As the above writer says he prefers two alphabets to one; the editor hereby sets him at defiance to produce two books in any language (however large they are,) from whence the student or traveller can collect such information as is contained in this small volume, price 7s.

Mr. Pye also published a correct and complete representation of all the provincial copper coins, tokens of trade, and cards of address, on copper, that were circulated as such between the years 1787 and 1801; when they were entirely superseded by a national copper coinage. The whole on fifty-five quarto plates, price 20s. being a necessary appendage to every library; there being a very copious index.

One of his Majesty's Justices of the Peace

COUNTIES OF WARWICK AND WORCESTER.

As you occasionally amuse yourself with topographical pursuits, deign to accept of the following pages, from

Whoever may take the trouble of looking into the following pages, will soon perceive that in some instances the editor has been very brief in his description of the public institutions; to which he pleads guilty, and accounts for it by observing, that the undermentioned card was written and delivered by him personally, to every public institution, at the respective places where the business is transacted, and when he called again, after a lapse of two months, there were several instances where all information was withheld. Having, as he thought, proceeded in the most genteel way, by soliciting assistance in a private manner, he feels doubly disappointed in not being able to give the public such information as might reasonably be expected in a publication of this kind.—Had his endeavors been seconded by those who are to a certain degree interested in the event, there are several points that would have been explained more at large; but being deprived of such assistance, he ventures to appear before the tribunal of the public, and to give them the best information that he has been able to obtain....