A Day at the County Fair 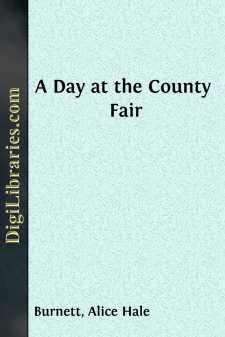 "Oh, push it harder, much harder, so I can go away up to the tree tops," cried Jerry. "Don't you just love to fly through the air this way?"

"There!" she exclaimed, "that's the best I can do, Geraldine White. I'm hot all over now," and she dropped down on the soft grass at the foot of a big tree.

"After the old cat dies, I'll give you a fine swing," promised Jerry. "You'll think you're in an airship."

Flying down the street, her hair streaming behind her, came Beth, her cheeks aglow and her dark eyes dancing with excitement.

Mary had run at once to meet her and Jerry followed as soon as she could stop the swing.

"It's the loveliest news," panted Beth when she had reached them—"an invitation."

"Oh, do tell us what it is," demanded the other two in chorus.

"Well," continued Beth, placing an arm about each as they all walked up the path, "it's to go motoring. My uncle Billy is going to take us," and she gave each girl a little hug. "But that isn't all," she added. "There's a surprise on the end of the ride."

Jerry danced up the path with joy.

"A motor ride and a surprise all in one day," thought Jerry.

"I think it's just dear of him to ask us to go, too," said Mary. "He could have taken you alone."

Beth smiled, as she replied:

"It wouldn't be half as much fun without you, and I don't know what the surprise is, either; Uncle Billy wouldn't tell me."

"Why, to-day, of course," was the laughing answer; "that's why I hurried so. We'll stop for you both at eleven o'clock, and Uncle Billy says he'll bring us all back safely by six o'clock to-night. I do hope your mothers will allow you to go."

"Oh, mercy! I must hurry. I'll have to ask Mother, and then change my dress," and Mary darted down the path. "I'll come back here when I'm ready," she called to them over her shoulder.

"I shall have to hurry home, too," laughed Beth, "but, Jerry, before I leave, do go in and ask your mother if you may go."

It took but a moment for Jerry to reach the house and in another she had reached the room where her mother sat sewing.

"Jerry, what are you talking about?" asked Mrs. White; "a motor ride and a surprise; what do you mean, dear?"

"Oh," giggled Jerry, "I always get mixed up when I talk fast," and standing beside her mother, she explained about the invitation she had just received from Beth.

"Indeed you may go, and I'm sure you will enjoy it very much," was her mother's reply. "But now you'd better run upstairs and get ready, for you haven't much time."

Jerry, happy to receive her mother's permission, flew to the door.