A Daughter of the Dons A Story of New Mexico Today 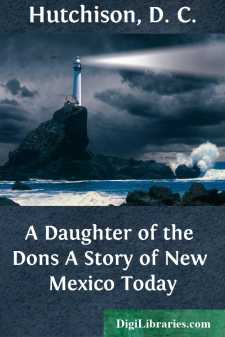 For hours Manuel Pesquiera had been rolling up the roof of the continent in an observation-car of the "Short Line."

His train had wound in and out through a maze of bewildering scenery, and was at last dipping down into the basin of the famous gold camp.

The alert black eyes of the young New Mexican wandered discontentedly over the raw ugliness of the camp. Towns straggled here and there untidily at haphazard, mushroom growths of a day born of a lucky "strike." Into the valleys and up and down the hillsides ran a network of rails for trolley and steam cars. Everywhere were the open tunnel mouths or the frame shaft-houses perched above the gray Titan dump beards.

The magic that had wonderfully brought all these manifold activities into being had its talisman in the word "Gold"; but, since Pesquiera had come neither as a prospector nor investor, he heard with only half-concealed impatience the easy gossip of his fellow travelers about the famous ore producers of the district.

It was not until his inattentive ears caught the name of Dick Gordon that he found interest in the conversation.

"Pardon, sir! Are you acquaint' with Mr. Richard Gordon?" he asked, a touch of the gentle Spanish accent in his voice.

The man to whom he had spoken, a grizzled, weather-beaten little fellow in a corduroy suit and white, broad-brimmed felt hat, turned his steady blue eyes on his questioner a moment before he answered:

"I ought to know him, seeing as I'm his partner."

"Then you can tell me where I may find him?"

"Yes, sir, I can do that. See that streak of red there on the hill—the one above the big dump. That's the shafthouse of the Last Dollar. Drop down it about nine hundred feet and strike an airline west by north for about a quarter of a mile, and you'd be right close to him. He's down there, tackling a mighty uncertain proposition. The shaft and the workings of the Last Dollar are full of water. He's running a crosscut from an upraise in the Radley drift, so as to tap the west tunnel of the Last Dollar."

"It is dangerous, you inform me?"

"Dangerous ain't the word. It's suicide, the way I look at it. See here, my friend. His drill goes through and lets loose about 'steen million gallons of water. How is he going to get in out of the rain about that time?"

The New Mexican showed a double row of pearly teeth in a bland smile.

"Pardon, sir. If you would explain a leetle more fully I would then comprehend."

"Sure. Here's the way it is. Dick and his three men are plugging away at the breast of the drift with air-drills. Every day he gits closeter to that lake dammed up there. Right now there can't be more'n a few feet of granite 'twixt him and it. He don't know how many any more'n a rabbit, because he's going by old maps that ain't any too reliable. The question is whether the wall will hold till he dynamites it through, or whether the weight of water will crumple up that granite and come pouring out in a flood."