A Critique of the Theory of Evolution 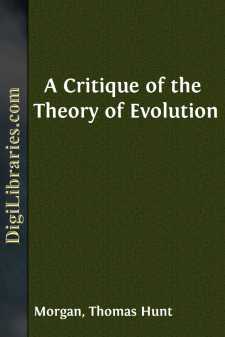 Add to My Favorites
Published: 8 years ago
Downloads: 63
Rating: (0 Votes)

We use the word evolution in many ways—to include many different kinds of changes. There is hardly any other scientific term that is used so carelessly—to imply so much, to mean so little.

When the biologist thinks of the evolution of animals and plants, a different picture presents itself. He thinks of series of animals that have lived in the past, whose bones (fig. 1) and shells have been preserved in the rocks. He thinks of these animals as having in the past given birth, through an unbroken succession of individuals, to the living inhabitants of the earth today. He thinks that the old, simpler types of the past have in part changed over into the more complex forms of today.

He is thinking as the historian thinks, but he sometimes gets confused and thinks that he is explaining evolution when he is only describing it.

Fig. 1. A series of skulls and feet. Eohippus, Mesohippus, Meryhippus, Hipparion and Equus. (American Museum of Natural History. After Matthews.)

A third kind of evolution is one for which man himself is responsible, in the sense that he has brought it about, often with a definite end in view.

His mind has worked slowly from stage to stage. We can often trace the history of the stages through which his psychic processes have passed. The evolution of the steam-boat, the steam engine, paintings, clothing, instruments of agriculture, of manufacture, or of warfare (fig. 2) illustrates the history of human progress. There is an obvious and striking similarity between the evolution of man's inventions and the evolution of the shells of molluscs and of the bones of mammals, yet in neither case does a knowledge of the order in which these things arose explain them. If we appeal to the psychologist he will probably tell us that human inventions are either the result of happy accidents, that have led to an unforeseen, but discovered use; or else the use of the invention was foreseen. It is to the latter process more especially that the idea of purpose is applied....