A Cousin's Conspiracy A Boy's Struggle for an Inheritance 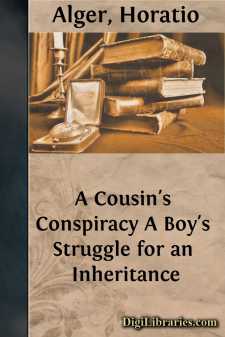 IN A LONELY CABIN

On the edge of a prairie, in western Iowa, thirty years ago, stood a cabin, covering quite a little ground, but only one story high. It was humble enough, but not more so than the early homes of some who have become great.

The furniture was limited to articles of prime necessity. There was a stove, a table, three chairs, a row of shelves containing a few articles of crockery and tinware, and a bed in the far corner of the room, on which rested a man with ragged gray beard and hair, a face long and thin, and coal-black eyes.

It was evident he was sick unto death. His parchment-colored skin was wrinkled; from time to time he coughed so violently as to rack his slight frame, and his hand, thin and wrinkled, as it rested on the quilt that covered him, shook as with palsy.

It was hard to tell how old the man was. He looked over seventy, but there were indications that he had aged prematurely.

There was one other person in the room whose appearance contrasted strongly with that of the old man—a boy of sixteen, with brown hair, ruddy cheeks, hazel eyes, an attractive yet firm and resolute face, and an appearance of manliness and self-reliance. He was well dressed, and would have passed muster upon the streets of a city.

“How do you feel, Uncle Peter?” he asked as he stood by the bedside.

“I shall never feel better, Ernest,” said the old man in a hollow voice.

“Don’t say that, uncle,” said Ernest in a tone of concern.

There seemed little to connect him in his strong, attractive boyhood with the frail old man, but they had lived together for five years, and habit was powerful.

“Yes, Ernest, I shall never rise from this bed.”

“Isn’t there anything I can get for you, uncle?”

“Is there—is there anything left in the bottle?” asked Peter wistfully.

Ernest walked to the shelf that held the dishes, and took from a corner a large black bottle. It seemed light, and might be empty. He turned the contents into a glass, but there was only a tablespoonful of whisky.

“It is almost all gone, Uncle Peter; will you have this much?”

Ernest lifted the invalid into a sitting posture, and put the glass to his mouth.

He drained it, and gave a sigh of satisfaction.

“It is good,” he said briefly.

“I wish there were more.”

“It goes to the right spot. It puts strength into me.”

“Shall I go to the village and buy more?”

“I can get back very soon.”

“I shall have to trouble you for some money, Uncle Peter.”

“Go to the trunk. You will find some.”

There was a small hair trunk in another corner. Ernest knew that this was meant, and he lifted the lid.

There was a small wooden box at the left-hand side. Opening this, Ernest saw three five-dollar gold pieces.

“There are but three gold pieces, uncle,” he announced, looking toward the bed.

“Take one of them, Ernest.”

“I wonder if that is all the money he has left?” thought Ernest....