A Court of Inquiry 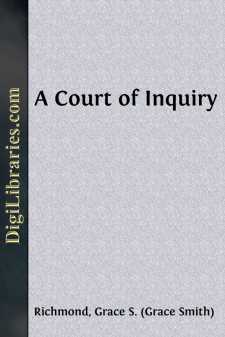 There are four guest-rooms in my house. It is not a large house, and how there came to be so many rooms to spare for the entertaining of friends is not a story to be told here. It is only a few years since they were all full—and not with guests. But they are nearly always full now. And when I assign each room it is after taking thought.

There are two men's rooms and two for women. The men's rooms have belonged to men, and therefore they suit other men, who drop into them and use their belongings, and tell me they were never more comfortable. The third room is for one after another of the girls and women who visit me. The fourth room——

"Is anybody really good enough to sleep in this place?"

It was the Skeptic, looking over my shoulder. He had chanced to be passing, saw me standing in the doorway in an attitude of adoration, and glanced in over my head. He had continued to look from sheer astonishment.

"I should expect to have to take off my shoes, and put on a white cassock over my tennis flannels before I could enter here," he observed.

"You would not be allowed to enter, even in that inappropriate costume," I replied. "I keep this room only for the very nicest of my girl friends. The trouble is——"

"The trouble is—you're full up with our bunch, and have got to put Miss Althea here, whether she turns out to be the sort or not."

I had not expected the Skeptic to be so shrewd—shrewd though he often is. Being also skeptical, his skepticism sometimes overcolours his imagination.

"Suppose she should leave her slippers kicking around over those white rugs, drop her kimono in the middle of that pond-lily bed, and—er—attach a mound of chewing-gum to the corner of the mirror," he propounded.

"I should send her home."

"No—you could do better than that. Make her change rooms with the Philosopher. He wouldn't leave a speck the size of a molecule on all that whiteness."

"I don't believe he would," I agreed. As the Skeptic went laughing away downstairs I turned again into the room, in order that I might tie back the little inner muslin curtains, to let the green branches outside show between.

Althea arrived at five. The Skeptic, in tennis flannels, was lounging on the porch as she came up the steps, and scanned her critically over the racquet he still held, after a brisk set-to with the Gay Lady, who is one of my other guests. (We call her the Gay Lady because of her flower-bright face, her trick of smiling when other people frown, and because of a certain soft sparkle and glow about her whole personality, as indescribable as it is captivating). The Gay Lady had gone indoors to dress for the evening, and the Philosopher had not returned from the long daily tramp by which he keeps himself in trim. The Lad was on the porch mending some fishing-tackle—my Lad, with the clear young eyes which see things.

Althea gave the Skeptic a glance, the Lad a smile, and me a hearty embrace....