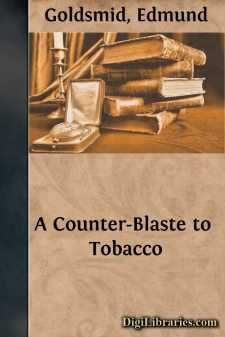 That the manifolde abuses of this vile custome of Tobacco taking, may the better be espied, it is fit, that first you enter into consideration both of the first originall thereof, and likewise of the reasons of the first entry thereof into this Countrey. For certainely as such customes, that haue their first institution either from a godly, necessary, or honorable ground, and are first brought in, by the meanes of some worthy, vertuous, and great Personage, are euer, and most iustly, holden in great and reuerent estimation and account, by all wise, vertuous, and temperate spirits: So should it by the contrary, iustly bring a great disgrace into that sort of customes, which hauing their originall from base corruption and barbarity, doe in like sort, make their first entry into a Countrey, by an inconsiderate and childish affectation of Noueltie, as is the true case of the first inuention of Tobacco taking, and of the first entry thereof among vs. For Tobacco being a common herbe, which (though vnder diuers names) growes almost euerywhere, was first found out by some of the barbarous Indians, to be a Preseruative, or Antidot against the Pockes, a filthy disease, whereunto these barbarous people are (as all men know) very much subiect, what through the vncleanly and adust constitution of their bodies, and what through the intemperate heate of their Climate: so that as from them was first brought into Christendome, that most detestable disease, so from them likewise was brought this vse of Tobacco, as a stinking and vnsauorie Antidot, for so corrupted and execrable a Maladie, the stinking Suffumigation whereof they yet vse against that disease, making so one canker or venime to eate out another.

And now good Countrey men let vs (I pray you) consider, what honour or policie can mooue vs to imitate the barbarous and beastly maners of the wilde, godlesse, and slauish Indians, especially in so vile and stinking a custome? Shall wee disdaine to imitate the maners of our neighbour France (hauing the stile of the first Christian Kingdom) and that cannot endure the spirit of the Spaniards (their King being now comparable in largenes of Dominions to the great Emperor of Turkie). Shall wee, I say, that haue bene so long ciuill and wealthy in Peace, famous and inuincible in Warre, fortunate in both, we that haue bene euer able to aide any of our neighbours (but neuer deafed any of their eares with any of our supplications for assistance) shall we, I say, without blushing, abase our selues so farre, as to imitate these beastly Indians, slaves to the Spaniards, refuse to the world, and as yet aliens from the holy Couenant of God? Why doe we not as well imitate them in walking naked as they doe? in preferring glasses, feathers, and such toyes, to golde and precious stones, as they do? yea why do we not denie God and adore the Deuill, as they doe?

Now to the corrupted basenesse of the first vse of this Tobacco, doeth very well agree the foolish and groundlesse first entry thereof into this Kingdome....