A Complete Account of the Settlement at Port Jackson 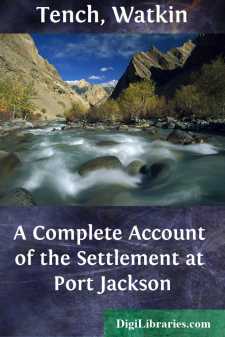 When it is recollected how much has been written to describe the Settlement of New South Wales, it seems necessary if not to offer an apology, yet to assign a reason, for an additional publication.

The Author embarked in the fleet which sailed to found the establishment at Botany Bay. He shortly after published a Narrative of the Proceedings and State of the Colony, brought up to the beginning of July, 1788, which was well received, and passed through three editions. This could not but inspire both confidence and gratitude; but gratitude, would be badly manifested were he on the presumption of former favour to lay claim to present indulgence. He resumes the subject in the humble hope of communicating information, and increasing knowledge, of the country, which he describes.

He resided at Port Jackson nearly four years: from the 20th of January, 1788, until the 18th of December, 1791. To an active and contemplative mind, a new country is an inexhaustible source of curiosity and speculation. It was the author's custom not only to note daily occurrences, and to inspect and record the progression of improvement; but also, when not prevented by military duties, to penetrate the surrounding country in different directions, in order to examine its nature, and ascertain its relative geographical situations.

The greatest part of the work is inevitably composed of those materials which a journal supplies; but wherever reflections could be introduced without fastidiousness and parade, he has not scrupled to indulge them, in common with every other deviation which the strictness of narrative would allow.

When this publication was nearly ready for the press; and when many of the opinions which it records had been declared, fresh accounts from Port Jackson were received. To the state of a country, where so many anxious trying hours of his life have passed, the author cannot feel indifferent. If by any sudden revolution of the laws of nature; or by any fortunate discovery of those on the spot, it has really become that fertile and prosperous land, which some represent it to be, he begs permission to add his voice to the general congratulation. He rejoices at its success: but it is only justice to himself and those with whom he acted to declare, that they feel no cause of reproach that so complete and happy an alteration did not take place at an earlier period.

CHAPTER I. A Retrospect of the State of the Colony of Port Jackson, on the Date of my former Narrative, in July, 1788.

Previous to commencing any farther account of the subject, which I am about to treat, such a retrospection of the circumstances and situation of the settlement, at the conclusion of my former Narrative, as shall lay its state before the reader, seems necessary, in order to connect the present with the past.

The departure of the first fleet of ships for Europe, on the 14th of July, 1788, had been long impatiently expected; and had filled us with anxiety, to communicate to our friends an account of our situation; describing the progress of improvement, and the probability of success, or failure, in our enterprise....